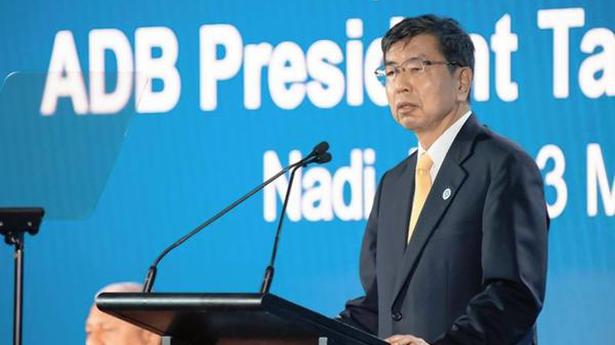 The Asia-Pacific region is expected to power ahead growing at 5.7% this year but escalating trade tensions are a source of worry, according to Takehiko Nakao, President and Chairperson, Asian Development Bank.

Addressing the opening session of the Board of Governors at ADB’s 52nd Annual Meeting here, Mr. Nakao said that consumer and investor behaviour could be undermined by trade tensions between countries.

“There has been much debate about it but I’m a firm believer in the multilateral system,” he said, adding, “but we have to reform and reorient ourselves to earn the support of members and their taxpayers.”

The bank’s lending grew to a record $21.6 billion in 2018, 10% higher compared to 2017. Mr. Nakao elaborated on the Strategy 2030 plan of ADB which will focus on six key areas — operational and action plans for the private sector, addressing remaining poverty and inequality, accelerating progress in gender equality, continuing to foster regional cooperation and integration, expanding private sector operations and using concessional resources effectively.

Addressing the session, Fiji’s Prime Minister Josaia Voreque Bainimarama said: “The world has come to us. This conference marks the end of an era of missed opportunities for the Pacific region.”

This is the single largest gathering in Fiji with over 2,000 delegates and was the first time that the ADB held its annual meeting in the Pacific region, he pointed out.

(The correspondent is in Fiji at the invitation of ADB)

Sony latest to withdraw from Barcelona conference over coronavirus fears

Sony Corp on Monday became the fifth company to pull out of this month’s international telecoms conference in Barcelona over fears related to the coronavirus. The event, the Mobile World Congress – which attracts more than 100,000 visitors, is due to take place on Feb 24-27. Amazon.com Inc, South Korea’s LG Electronics , Swedish equipment […]

Watch | Impact of COVID-19 on the global economy

Explained: Why has the U.S. crippled the functioning of the WTO?

The story so far: Even as the trade war between China and the United States shows no signs of ending, Washington has paralysed the World Trade Organization’s Appellate Body, which acts as a supreme court for international trade. In December 2019, the U.S. chose to spike the Appellate Body by starving funds for its functioning. […]