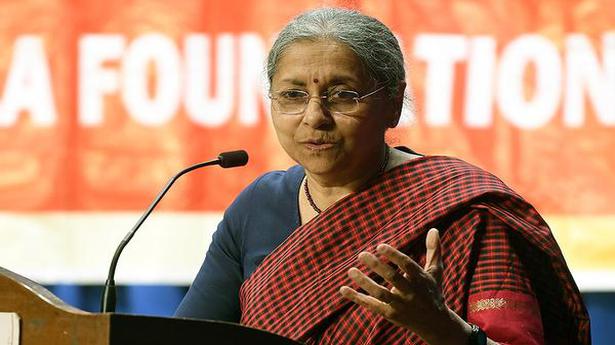 The central government being fiscally dependent on the Reserve Bank of India (RBI) is undesirable, according to Dr. Indira Rajaraman, former member of RBI’s central board. Delivering the Nani Palkivala Memorial lecture in the city on Saturday, she said, “The ₹68,000 crore that the RBI has paid to the government in the form of dividend or interim dividend since July 2018, forms 92% of the Centre’s entire income from dividends from all public sector financial institutions.” This, she added, “is very bad, as it makes the government fiscally dependent on the RBI.”

It means the Centre would then look upon the RBI as a cash cow and start questioning every rupee that the central bank spends, she said. “What the central bank does is foundational for the nation, and hence it must have the freedom to choose its areas of expenditure, including choice of employees.

“They need good training, remuneration, pension and housing. If the government constrains this, it is the people of India who will suffer.” She cited the example of China, which fully pays for its central bank employees’ PhDs in globally-acclaimed institutions in the West. “The RBI cannot be treated on par with a department of the Government of India. It is very separate, special” said Dr. Rajaraman, who was on the faculty of Indian Institute of Management Bangalore, and a member of the 13th Finance Commission.

RBI is among the leanest and most efficient organisations in the country, with a headcount of about 15,000 executing myriad functions, she said.

According to her, the RBI Act is clear that the government, as sovereign, is supreme and the RBI Governor functions under the pleasure of the government. “The regulator is a monopoly issuer of currency and hence the sovereign has to have ultimate control over such an issuer.” She felt that the media had played a role in building up the persona of the RBI Governor, who is not the chairman of the central bank board, but only convenes the board meetings and presides over them, she said. Dr. Rajaraman added, “There should be mutuality between the RBI and the government.”

She added that the central bank must also be free to question the measurement of inflation. “After all, the consumer price index- based inflation is the measure by which RBI is judged. So, there should be professional mutual respect between the government and the RBI.”

It was normal for governments and central banks to differ over interest rates, where the former would want low rates to spur growth, while the latter would be keen to raise rates if inflation seemed dangerously high. However, what was different in the recent “outbreak of hostilities”, as she called it, between the government and the RBI was the invocation of Section 7 of the RBI Act, which had never been invoked.

She also said it was ‘unfortunate’ that the services of director on RBI’s board, Nachiket Mor, were terminated just a year into his second four-year stint, in October 2018.

“The Centre has the right to recall these nominations but it created ill-feeling. It was said that the termination was due to his being the country director of the Bill & Melinda Gates Foundation in India, resulting in conflict of interest, but that information was available at the time he was reappointed. So, it reflects poorly on the government’s due diligence if it did not know this.”

Why is GSP vital to India-U.S. trade ties?

What is the programme? The Generalized System of Preferences is the largest and oldest United States trade preference programme. The U.S. intended it to promote economic development by eliminating duties on some products it imports from the 120 countries designated as beneficiaries. When was it introduced? It was established by the Trade Act of 1974. […]

The Income Tax Department and the Goods and Services Tax Network (GSTN) are all set to sign an MoU that will allow the two to match their data regarding company financials so as to pin down any anomalies. The department order provides for the Principal Director General or Director General of Income Tax (Systems) to […]