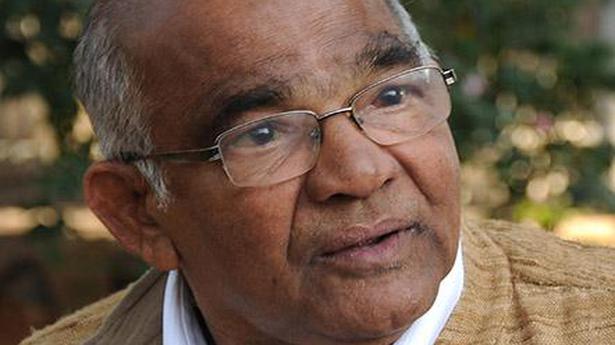 While the Goods and Services Tax (GST) Council was designed as a federal body between the States and the Centre, the complaint of the States is that the Centre is taking advantage of the arrangement and is delaying the dues to be paid to the States longer than is needed, according to Y.V. Reddy, former chairman of the Fourteenth Finance Commission.

“The GST Council is an institution built on the cooperation of the Centre and the States in the matter of taxation,” Mr. Reddy said in an interview ahead of the release of his book ‘Indian Fiscal Federalism’ on Thursday.

“Another point is that the Finance Commission (FC) awards are more in favour of the poorer States, while the non-FC expenditures actually don’t go to poorer States, they are regressive,” Mr. Reddy said.

“There is an impression that leaving expenditure to the Centre’s discretion, instead of the FC, means that they can spend on the backward States.”

“That is the assumption, but the record so far is the opposite,” he added. “The empirical evidence confirms this. The explanation is possibly that political bargaining is better for the forward States, or their absorption capacity is better.”

On the future roles of the FCs and the NITI Aayog, Mr. Reddy said that there was a need for a body such as the FCs to make sure that there was a stable formula for transfers to the States. There was also a need for a federal body, which is trusted by both the States and the Centre, that would provide a forum for the political bargaining that was behind the allocation of other funds to the States, such as grants in aid.

“The right way of going about it is that there should be a political forum and expertise also, which will arrive at the criteria for such transfers,” the former RBI Governor said.

“That body should come under the confidence of both the States and the Centre, and not just identify with the Centre. If the NITI Aayog were to occupy this role, then the first thing is for it to get the trust of the States.”

Mr. Reddy also weighed in on the controversy surrounding the Terms of Reference for the Fifteenth Finance Commission, saying that the way forward was to use the latest population data available, and then also factor in other factors that would reward the efficiency of the States. “Population is the easiest and most quantifiable metric, provided it is the relevant population,” he said. “It should be population of the period for which you are giving the award. Definitely the outdated data is not appropriate. The latest data should be used.”

“The whole debate is whether to reward efficiency or try for equity,” Mr. Reddy added. “If you do both, they cancel out. So, the issue is how to balance these.”

Tata Steel reported a consolidated net loss of ₹1,229 crore for the third quarter compared to a profit of ₹1,753 crore a year earlier. The loss was reported on an 8.6% fall in revenues to ₹35,520 crore on the back of a decline in steel prices. Mr. T.V. Narendran, CEO and MD, Tata Steel, said, […]

PM’s handling of economy a step above ‘junk’ as per Moody’s: Rahul Gandhi