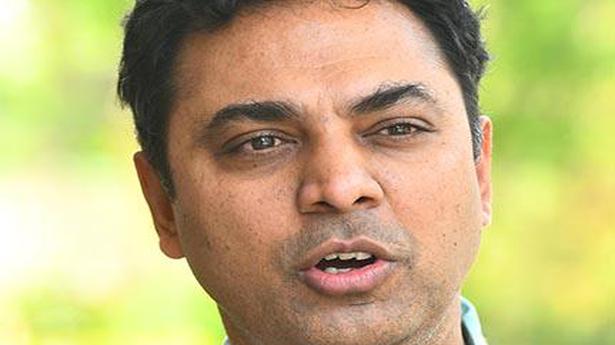 Finance Secretary Rajiv Kumar and Chief Economic Advisor Krishnamurthy Subramanian conceded to a Parliamentary panel on Finance, headed by BJP MP and former Minister of State for Finance Jayant Sinha, that the country is going through an “economic slowdown”.

Union Finance Minister Nirmala Sitharaman has so far avoided the use of word “slowdown”.

Mr. Subramanian made a presentation in which he said that all is well with the Indian economy and it is growing at around 5%, which is far better than many other countries. According to multiple sources, the presentation drew sharp questions from MPs across parties. Chairperson of the committee Mr Sinha told Mr Subramanian not to give “simplistic explanations”. The MPs pointed out that it was wrong to blame the global downturn entirely because there are patches in global economy which are still doing well.

“They were not willing to accept that there is a crisis in the Indian economy. They were pushed very hard by the committee members. Finally, when they were asked point blank on whether there is a crisis or not, the Finance Secretary Rajiv Kumar and Chief Economic Advisor Mr Subramanian conceded that, yes, there is a slowdown,” an opposition MP who was present at the meeting told The Hindu. At least two other committee members from different parties confirmed the exchange.

The Congress has accused Prime Minister Narendra Modi of violating Indian foreign policy’s “time honoured principle” of not interfering in the domestic elections of another country by campaigning for U.S. President Donald Trump at the ‘Howdy, Modi’ event in Houston. In a series of tweets, Congress senior spokesperson Anand Sharma said Mr. Modi was in […]

The 40th Wayanad revenue district school youth festival will be held at Government Higher Secondary School, Padinjarethara, from Monday to Friday. Off-stage events will be held on Monday and Tuesday, while on-stage competitions will be held on Wednesday, Thursday, and Friday, the organisers said in a release here on Saturday. C.K. Saseendran, MLA, will formally […]

Equity benchmark indices touched new record highs on Tuesday before investors booked profit, thereby leading to the benchmarks ending the day in the red even as market participants expect further upside if the election results are in line with the exit polls. The 30-share Sensex touched a new high of 39,571.73 — 219 points higher […]