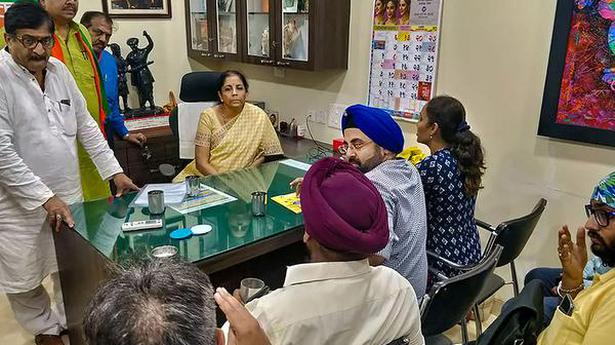 Finance Minister Nirmala Sitharaman promised legislative and regulatory reforms for the country’s co-operative sector in the winter session of Parliament to protect depositors in entities like Punjab and Maharashtra Co-operative Bank that have jeopardised the life savings of several lakh customers.

Ms. Sitharaman has tasked an official committee that includes the Banking Secretary and Department of Economic Affairs Secretary in the Finance Ministry, as well as a Reserve Bank of India Deputy Governor, to review the legal framework governing co-operative banks and revert with recommendations to bolster their governance and supervision.

The Finance Ministry is also in the midst of discussions to work out a resolution framework for financial institutions, including non-banking financial companies and banks, on the lines of the Insolvency and Bankruptcy Code for businesses.

All options, including a fresh look at the Financial Resolution and Deposit Insurance (FRDI) Bill, are under consideration, the Minister said.

Ms. Sitharaman, who was in Mumbai to endorse CM Devendra Fadnavis’s re-election campaign, was greeted by protesting PMC depositors at her arrival at the BJP’s State headquarters and agreed to meet them to understand their concerns.

“Even as I came in, there were a few of the badly affected customers of the PMC Bank who were waiting to meet. So I did call them inside, sat with them… and heard their problems,” she said. She added she had assured them that she will have a fresh word with the RBI Governor to try to expedite the lifting of withdrawal restrictions of ₹25,000 currently applicable on customers. While the RBI regulates multi-State rural co-operative banks and urban co-operative banks, their registration is governed by the Rural Development and Urban Development Ministries, the Minister explained.

“Therefore, in such instances, where there is some malpractice and the boards get bypassed, the Reserve Bank takes care of placing a resolution professional that takes care of the matter. I also told the affected PMC customers this doesn’t mean that the Government of India is doing nothing about it,” Ms. Sitharaman said, before detailing the new committee’s mandate.

“From my side, I have asked the Secretaries in my Ministry’s departments for banking and economic affairs to work with the Ministries of Rural and Urban Development to study in detail what is happening in multi-State co-operatives that also run banks. The RBI will also be represented of course, to understand where there were shortcomings and, if necessary, look at the ways in which the respective Acts can be amended,” Ms. Sitharaman said.

“If the amendments are going to help us curb malpractices, with better regulation and empowerment of the regulator, then we would like to do that. Necessary legislative steps will be taken to prevent such things from happening again in future and empower the regulator even better, if there are shortcomings,” the minister stressed, adding that the government will work to bring in necessary changes in the forthcoming Winter session of Parliament.

The committee may also look at the ₹1 lakh insurance cover for bank depositors that has not been revised since 1993, she said.

In response to a query from The Hindu on whether the FRDI Bill, shelved in 2017, could also be revived, Ms. Sitharaman said there is some discussion on the matter in the Ministry.

“On this particular bill, that was in consideration some time ago and was for some reasons put on the backburner… We are conscious that for financial institutions, something similar to the IBC doesn’t exist. So we want to see what is the best way to resolve this,” she explained.

“I have spoken to the RBI Governor a few times on this already in the last two weeks. And on my return to Delhi today, I will once again talk to the Governor and convey the sense of urgency and distress that the PMC’s clients have expressed before me. And I shall request him to expedite the permissions for withdrawal of their money. I can only emphasise this has to be done fairly quickly in view of the distress,” she said.

Following the recent incidence of fraud at the Punjab and Maharashtra Cooperative Bank (PMC Bank), which caused panic among some sections of the depositors, the government is vetting a proposal from the Deposit Insurance and Credit Guarantee Corporation (DICGC) to increase the deposit insurance limit. Sources in the know of the development said, the DICGC […]

Finance Minister Nirmala Sitharaman on Sunday unveiled a book on global finance and said it suggests solutions for challenges that the world and Indian economy is currently facing. Launching the book titled The Rise of Finance: Causes, Consequences and Cure, Ms. Sitharaman said it will help “understand the current economic situation facing both the world […]