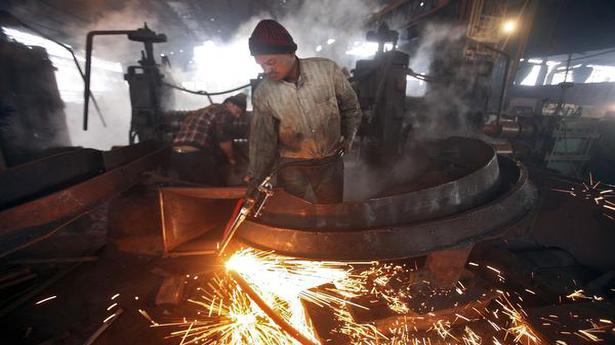 Growth of eight core industries dropped to 0.2% in June mainly due to a contraction in oil-related sectors as well as in cement production, according to official data.

According to the data released by the government, crude oil output contracted by 6.8% while the refinery segment de-grew by 9.3%.

Cement output declined by 1.5%. Fertiliser production was also in the negative zone.

Steel and electricity production, however, increased by 6.9% and 7.3%, respectively, during the month under review.

During April-June, the eight sectors grew by 3.5% compared with 5.5% in the same period last year.

The exchange rate dynamics in India is driven by capital flows rather than current account balances, Reserve Bank of India Deputy Governor B.P. Kanungo said, adding that the central bank’s intervention in the foreign exchange market was aimed at curbing sudden turbulences not backed by economic fundamentals. Speaking at the Forex Association of India Conference […]

India will achieve a GDP growth of 8% plus from fiscal year 2020-2021 onwards as the structural reform measures like the GST are set to yield the intended benefits, NITI Aayog Vice-Chairman Rajiv Kumar has said. The eminent economist was in the city for the High Level Political Forum Ministerial Meeting on Sustainable Development Goals […]

Six of the 10 most valued domestic companies together added a staggering ₹1.26 lakh crore in market valuation last week, with RIL and HDFC Bank topping the chart. HUL, Kotak Mahindra Bank, ITC and ICICI Bank were the other winners in the top-10 list, while SBI, Infosys, HDFC and Tata Consultancy Services (TCS) saw a […]