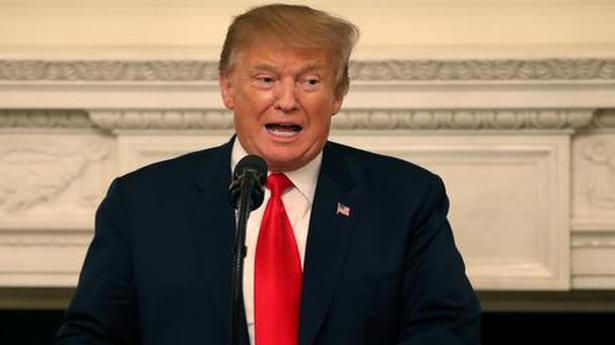 United States President Donald Trump has said he intends to end the preferential trade terms for India under the U.S.’s Generalized System of Preferences (GSP) program.

The program, which sets zero tariffs for certain goods from a set of 120 developing countries in order to foster trade and economic development, accounts for some $5.6 billion of India’s exports to the U.S, making India the largest GSP beneficiary.

“I am taking this step because, after intensive engagement between the United States and the Government of India, I have determined that India has not assured the United States that it will provide equitable and reasonable access to the markets of India…” Mr. Trump said in a letter to the Speaker of the House of Representatives and President of the Senate, shared with reporters.

“India has implemented a wide array of trade barriers that create serious negative effects on United States commerce.  Despite intensive engagement, India has failed to take the necessary steps to meet the GSP criterion,” the United States Trade Representative (USTR) said on its website.

India’s new e-commerce rules, price controls on medical devices and tariffs on ICT (information and communications technolog) products are among the issues that have caused trade frictions between the two countries. Mr. Trump has repeatedly taken shots at India’s tariffs, which he views as unreasonable.

One of the discretionary criteria the President must (as per the GSP statute) take into account while determining the GSP eligibility is the “extent to which such country has assured the United States that it will provide equitable and reasonable access to its markets and basic commodity resources and the extent to which it has assured the United States it will refrain from engaging in unreasonable export practices.”

A mandatory 60 days must now pass after notice has been given to the beneficiary countries and to Congress, during which time there is, at least technically, the possibility of negotiation. After the 60-day period, a beneficiary country can be taken off the GSP list by a presidential proclamation.

Notably, Mr. Trump’s letter to the two congressional leaders also says, ‘I will continue to assess whether the Government of India is providing equitable and reasonable access to its markets, in accordance with the GSP eligibility criteria.”

It is not likely though that it will be re-negotiation of India’s place under the system, a source familiar with the  told The Hindu.

A separate letter was sent to congressional leaders by Mr. Trump saying he intended to withdraw Turkey from the list of GSP beneficiaries. However, the reasons were different: Mr. Trump said Turkey was no longer at a level of economic development that warranted preferential treatment.

“ In particular, in the four and a half decades since Turkey’s designation as a GSP beneficiary developing country, Turkey’s economy has grown and diversified,” the letter said.

After the exchange of fire stopped, two bodies, one male and one female, were recovered from the spot. Source: thehindu.com Related

Case against Ponmudi and 99 others for violating prohibitory orders