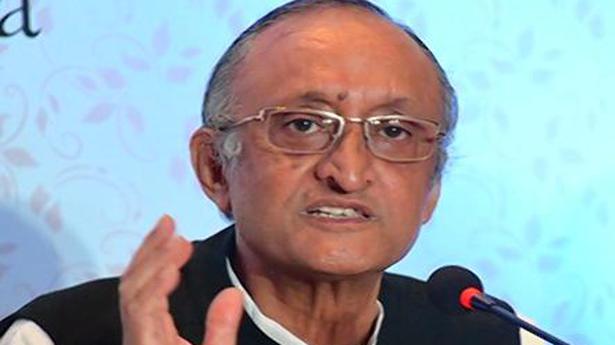 West Bengal Finance Minister Amit Mitra on Monday said that the current slowdown in the economy is due to “structural” changes and not “cyclical“.

He said the structural changes have been ushered in due to demonetisation and “faulty” GST implementation along with the collapse of IL&FS which crippled the NBFC sector.

“The slowdown in the economy is structural and not cyclical. This structural change has been brought about by demonetisation, hasty and faulty implementation of GST and the collapse of the IL&FS,” Mr. Mitra said at the annual general meeting of Bengal Chamber of Commerce & Industry here.

He said that when the economy was “coming up from the U-curve, the rising growth rate was hit by demonetisation which caused GDP growth to fall from 8.15% to 7.17%”.

“Another massive structural change came from the GST implementation,” he claimed.

Mr. Mitra said that he had spoken to Goods and Services Tax Network (GSTN) Chairman who told him that the country “was not ready for its implementation on the scheduled date”.

“But a singular decision in the democracy was taken by the government and GST was implemented from July 1, 2017,” he said.

Lastly, the collapse of IL&FS crippled the NBFC sector which is now facing huge liquidity crunch, he added.

Regarding the direct tax collection, he said the government could mop-up only 4.7% more so far this year.

In order to meet the budgetary target of 17.3 per cent, the growth in direct tax collection will have to be 27% in the remaining months of this fiscal, Mr. Mitra said.

“Is it possible to meet the target for an economy which is witnessing slowdown?” he asked.

Regarding GST, he said that collection of the indirect tax is not meeting its target.

Talking about West Bengal, he said that the State Cabinet had cleared the proposal of Tata Metaliks’ expansion plan in Kharagpur and the company will invest ₹600 crore for this.

The expansion project will create job opportunities for 3,500 people, he added.

Gold prices rose to a more than seven-year high on Tuesday on rising fears of a steeper economic downturn and amid massive liquidity measures by global central banks. Spot gold gained 0.6% to $1,724.72 per ounce by 0804 GMT, having touched its highest since Nov. 2012 at $1,726.85 earlier in the session. U.S. gold futures […]

Central Bank of India to sell NPAs worth over ₹3,300 crore

State-run lender Central Bank of India has decided to sell non-performing assets (NPAs) worth ₹3,300 crore to asset reconstruction companies and other financial institutions. The NPAs include Essar Steel, Bhushan Power and Steel, Alok Industries and Bombay Rayon Fashions. According to the bid document, Bhushan Power and Steel has an outstanding of ₹1,550.07 crore while […]