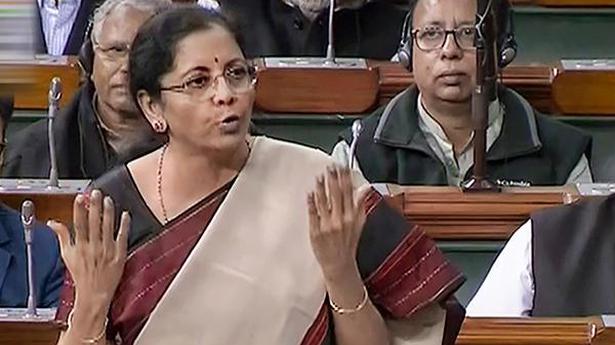 The economy is not in trouble, Finance Minister Nirmala Sitharaman told the Lok Sabha in her response to the debate on the Union Budget on Tuesday, highlighting seven macro-economic indicators as signs of revival.

Defending her government’s handling of the economy, Ms. Sitharaman lashed out at former finance minister and Congress MP P. Chidambaram, saying she had nothing to learn from the ‘competent doctors’ who gave ‘faulty remedies’, resulting in a mountain of non-performing assets (NPAs) and double-digit inflation.

In both Houses of Parliament, the Finance Minister cited data to show improvements in foreign direct investment (FDI) flows and net foreign portfolio investment (FPI), growth registered by the Index of Industrial Production (IIP) after several months of contraction, healthy forex reserves, a rise in gross GST collections and a 5% growth in market cap of the BSE Sensex.

In the Lok Sabha, she also outlined details of the government’s initiatives to drive the four engines of growth, public and private investment, public consumption, and exports.

In the Rajya Sabha, however, she embarked on a stinging attack against Mr. Chidambaram and the UPA government’s economic record.

“I heard former Finance Minister’s speech with great intent and keenness. There was more sarcasm than content,” she said, adding that her government would not “repeat the faulty remedies” prescribed by UPA government during the economic crisis of 2008-09 .

She said the UPA government’s actions then had led to the twin balance sheet crisis faced by banks, mounting non-performing assets and fleeing defaulters. There was a flight of capital and foreign investment in 2012-13, she said.

Rebutting charges of fudging accounts, she instead accused the UPA of shifting the burden of oil bonds onto the books of oil marketing companies.

Ms. Sitharaman, however, refused to answer a question by Congress leader Anand Sharma. “The hon’ble minister said that in 2019-20 fiscal deficit was 3.8% (of GDP) and revenue deficit was 2.4%. Out of the borrowed money, the capital expenditure was 1.4%. This time, she has reduced the fiscal deficit to 3.5%. The revenue deficit is pegged at 2.8%. That leaves only 0.9% for the capital expenditure. Can you clarify,” Mr. Sharma asked.

Reacting to Ms. Sitharaman’s speech, Mr. Chidambaram said that her unwillingness, or inability, to answer a straightforward question spoke volumes about the FM as well as the government.

The measures announced by the government will help in promoting investments, demand and ease of doing business, exporters’ body FIEO said on Friday. The Federation of Indian Export Organisations (FIEO) president Sharad Kumar Saraf said the release of funds to recapitalise public sector banks will go a long-way in easing liquidity, further giving the much-needed […]

Less than 3% of this season’s sanctioned amount of pulses and oilseeds have actually been procured so far under the once-hyped PM-AASHA scheme, Agriculture Ministry data show. Arrivals of these crops began in October and will end by February. A total of 37.59 lakh metric tonnes of procurement had been sanctioned under the Centrally funded […]