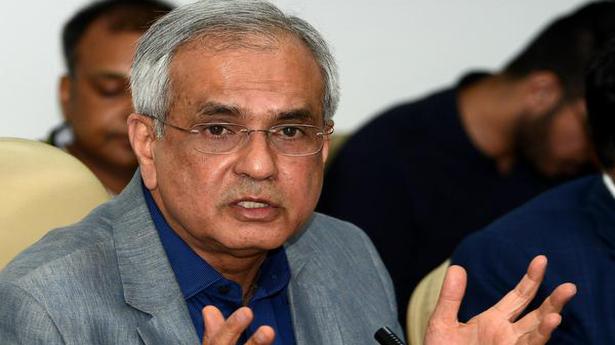 India’s economic growth is likely to reach pre-COVID-19 levels by the end of the 2021-22 fiscal as the GDP contraction in this financial year is expected to be less than 8%, NITI Aayog vice chairman Rajiv Kumar said on Sunday.

Also read: The RBI tunes in to the economy

“We should reach pre-COVID-19 levels at the end of fiscal year 2021-22 for sure,” Mr. Kumar told PTI when asked about growth projection for the next financial year. He added that the GDP contraction this fiscal is expected at less than 8%.

India’s economy recovered faster than expected in the September quarter as a pick-up in manufacturing helped GDP clock a lower contraction of 7.5% and held out hopes for further improvement on better consumer demand.

Replying to a question on asset monetisation, he said this is ongoing work and it has received attention at the highest level.

“We will continue to pursue this and make sure that the targets of asset monetisation are reached,” Mr. Kumar stressed.

The government is looking to raise ₹2.10 lakh crore through disinvestment in the current fiscal. This includes ₹1.20 lakh crore from Central Public Sector Enterprise (CPSE) stake sale and ₹90,000 crore from sale of government stake in financial institutions.

Talking about banking reforms, he said the sector needs further expansion and an increase in competition because India’s private debt to GDP ratio remains limit to mid 50s.

Stating that in case of other emerging economy, private debt to GDP ratio is well beyond 100%, Mr. Kumar said that “so we need to increase private debt and this will happen when our banking sector will expand”.

On the Indian agriculture sector, he said the NITI Aayog now is very strongly pushing the programmes for chemical free natural farming which has a potential to reduce cost for agriculture production dramatically and also has very positive impact on the environment. Kumar said the expansion of natural farming all over the country will make Indian agriculture more competitive and it also promises to have a significant positive impact on farmers’ income.

Railways to create 8 lakh mandays employment over next 125 days

It will focus on 116 districts with a large concentration of returnee migrant workers in 6 States Source: thehindu.com Related

T.V. Somanathan, Secretary (Expenditure), Union Ministry of Finance said that exports would not be the main driver of India’s growth in the next three years which will have to be led by domestic investment and consumption. During panel panel discussion on Indian Economy — on the road to recovery? organised by the United Way Chennai, […]

Not just pent up demand that is reviving economy: FM

Without delving into the budget she will present in two months, she said the government and the Reserve Bank are coordinating for a quicker economic recovery Finance Minister Nirmala Sitharaman on Friday said the economy reflating at a rate faster than previously expected is not just due to pent up demand but also because of […]