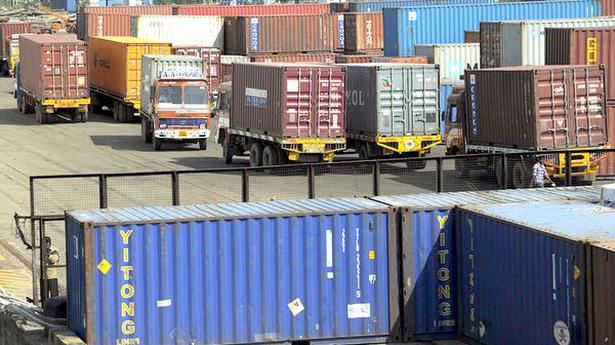 A marginal 2.44% increase in exports as well as lower imports of gold and petroleum products in February, significantly narrowed the country’s trade deficit to $9.6 billion, according to data released by the Commerce Ministry on Friday.

India’s merchandise exports rose to $26.67 billion in February from $26.03 in the year-ago month mainly on account of higher shipments in sectors such as pharmaceutical, engineering and electronics.

As per the data, the drop in imports was mainly on account of sharp decline in inward shipments of gold and petroleum products.

While the import of gold fell by about 11% to $2.58 billion in February, as against $2.89 billion in the corresponding month last fiscal, inward shipments of petroleum products were down by nearly 8% to $9.37 billion. During the April-February period of the current fiscal year, exports grew 8.85% to $298.47 billion, while imports rose by 9.75% to $464 billion. The trade deficit has widened to $165.52 billion during the 11 months of the current fiscal from $148.55 billion compared to the year-ago period, the data said.

President of exporters’ body FIEO Ganesh Kumar Gupta said 18 out of 30 major product groups were in positive territory, with most of them with marginal growth during the month. “However, with this trend, we will be able to achieve merchandise exports of about $330 billion, the highest ever exports for a fiscal,” he added.

While the government’s decision to re-classify large hydroelectric projects as renewable energy will certainly help the sector, the move will also go a long way in meeting the targets set by it for the sector, according to analysts. Earlier this month, the Union Cabinet approved a new hydroelectricity policy that, among other things, included large […]

United States. and Chinese trade negotiators shift to Shanghai this week for their first in-person talks since a G20 truce last month, a change of scenery for two sides struggling to resolve deep differences on how to end a year-long trade war. Expectations for progress during the two-day Shanghai meeting are low, so officials and […]