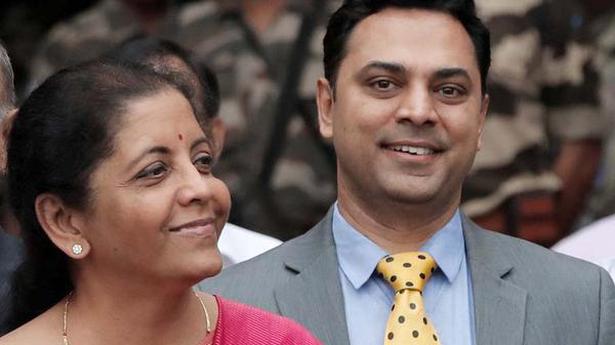 Finance Minister Nirmala Sitharaman on Wednesday clarified that the Economic Survey and the Union Budget project different rates of nominal GDP growth for 2019-20 because they use different base figures. However, she added that the two rates were consistent with each other.

While the Union Budget presented on July 5 projected a nominal GDP growth of 12% for financial year 2019-20, the Economic Survey pegged this figure at 11%. Opposition leaders in the Lok Sabha highlighted this discrepancy and demanded why there were so many different numbers being issued by the government.

The Opposition also walked out of the lower House during Ms. Sitharaman’s reply to the concerns over the Budget, protesting the Budget’s announcement of a hike in the duties and cess rates on petrol and diesel.

“Both the projections are consistent with each other as each of them project the nominal GDP of ₹2,11,00,607 crore for 2019-20,” she said, adding that the government holds the Economic Survey, which is produced by the Chief Economic Advisor, at a “respectful arm’s distance.”

Her explanation for the lower GDP base being used in the Budget was that this was the same number used in the Interim Budget presented in February.

Goods and Services Tax revenue in November came in at ₹1,03,492 crore, crossing the ₹1 lakh crore-mark once again after having dipped below it for three successive months. Average collections in financial year 2019-20 so far stand at ₹1,00,646 crore. The collections in November 2019 are the third-highest monthly collections since the introduction of GST, […]