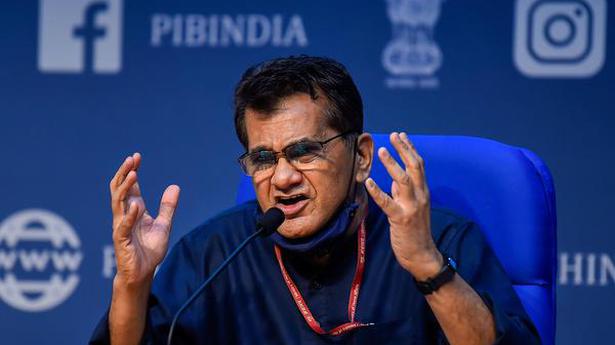 “We are making States compete on ease of doing business parameters. We are ranking States and naming and shaming them,” the NITI Aayog CEO said.

Niti Aayog CEO Amitabh Kant on Monday said that “unprecedented” reforms undertaken on both governance and economic fronts by the government will usher in a new era of growth and prosperity.

“The economic and governance reforms undertaken by the government have been quite unprecedented and they will usher in a new era of growth and prosperity,” he said.

“We are making States compete on ease of doing business parameters. We are ranking States and naming and shaming them,” he said while addressing a virtual event organised by industry body CII.

Listing out reforms undertaken by the government in recent times, Mr. Kant said as the world battles contraction in economic growth, India has initiated reforms in key sectors including agriculture, labour and mining.

“The labour reforms will help in making India a manufacturing hub,” Mr. Kant said adding that the country has also successfully improved its ranking in Global Innovation Index.

The NITI Aayog CEO said that Foreign Direct Investment (FDI) in India increased to $74 billion in 2019-20 from $36 billion in 2013-14 despite challenges in the global economic environment. Noting that infrastructure will be a key driver of growth, Mr. Kant said the National Infrastructure Pipeline (NIP) envisages $1.5 lakh crore of investments and 21% of those will come from the private sector.

The project pipeline also has a high degree of readiness, he said adding that 40% projects are already under implementation.

“We have identified several assets for monetisation including gas pipelines, power lines, highways, ports, airports,” Mr. Kant said, adding that strategic disinvestment is another avenue to raise revenue to undertake capital investment. Noting that European and American companies will look for alternatives owing to the U.S.-China trade war, he said India can and must turn this crisis into an opportunity. “India is well placed to take advantage of realignment of the global supply chain,” Mr. Kant said.

The NITI Aayog CEO said the government has approved 10 production linked incentive (PLI) schemes across a range of areas, and the total budgetary outlay for 10 PLI schemes now stands at ₹1.96 lakh crore.

In the latest quarter (July to September 2019-20), India’s Gross Domestic Product grew at the slowest pace in 6.5 years. Also, the growth was not fuelled by private consumption or investment, the prime drivers of the economy, but through government spending which surged in recent quarters. Among the slowest GDP grew at 4.5% in the […]

Market regulator Securities and Exchange Board of India (SEBI) on Tuesday said foreign investors from Mauritius will continue to be eligible for Foreign portfolio investment (FPI) registration with increased monitoring as per international norms. The announcement comes after the tax haven was put on the ‘grey list’ of Financial Action Task Force (FATF), an inter-governmental […]