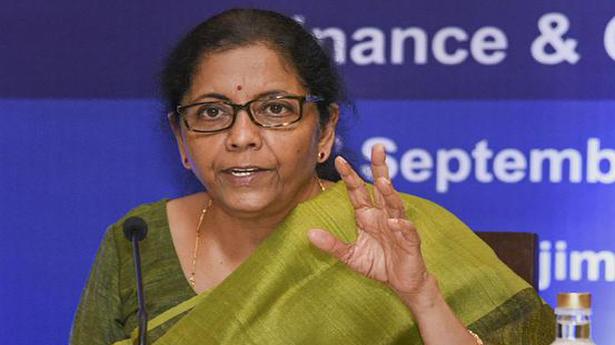 In its boldest gambit yet to stir up the economy, the government on Friday issued an ordinance to reduce the corporate tax rate for domestic firms and new manufacturing units by 10 to 12 percentage points, effectively bringing India’s tax rates on a par with its competing Asian peers.

The slew of measures unveiled by Finance Minister Nirmala Sitharaman, including a rollback of the enhanced surcharge levied on foreign portfolio investors in the Budget, and a reduction in the Minimum Alternate Tax (MAT) rate from 18.5% to 15% for all businesses, is estimated to cost the exchequer ₹1,45,000 crore a year in terms of revenue foregone.

Ms. Sitharaman said she was conscious of the impact of the package on the government’s fiscal arithmetic and the 3.3% fiscal deficit target for the year, but the government was betting on “more investments leading to more jobs and economic activity that would shore up revenues.”

“Today, we propose to slash the corporate tax rates for domestic companies and also for new manufacturing companies. We have issued an ordinance to amend the Income Tax Act of 1961 and the Finance Act of 2019,” she said.

“In order to promote growth and investment, a new provision has been inserted in the Income Tax law to allow any domestic company to pay income tax at the rate of 22% (from 30%), subject to the condition that they won’t avail any other (tax) incentives or exemptions. There will be no MAT levied on them and the effective tax rate for such firms will be 25.17%, including all surcharges and cess,” the Finance Minister said.

To spur fresh investments and boost Make in India efforts, for new manufacturing companies incorporated after October 1, 2019 and commencing production by March 31, 2023, the income tax rate will be 15% from 25% at present. The effective tax rate for these companies will be 17.01%, compared to 29.1% at present. These firms will also be exempt from MAT.

“In order to provide relief to firms who want to continue with the existing regime of exemptions, we are giving some MAT relief — the tax rate has been reduced from 18.5% to 15%,” the Minister said.

These tax cuts include a reduction in the surcharge on corporate income tax from 12% to 10%, pointed out Revenue Secretary Ajay Bhushan Pandey, stressing that the effective rate for MAT would also fall sharply. “The MAT rate of 18.5% along with surcharges used to be around 21% or 22%. Now that basic MAT rate has been reduced to 15%, and once you add up the surcharges, that comes to around 17% in the new regime,” he said.

The Finance Minister said that following these changes, India’s have become comparable with the lowest tax rates in South East Asian countries.

“In the face of global headwinds, this puts India right up on the map as a forward looking, business friendly and competitive operating environment,” said Naveen Aggarwal, partner and chief operating officer, Tax, KPMG in India

Firms currently availing income tax exemptions and incentives can opt for the new concessional tax regime with a headline tax rate of 22% after the expiry of their existing tax holidays or exemption periods. “This option, once exercised, cannot be withdrawn, so as to ensure there are no flip-flops,” Ms. Sitharaman said.

The Minister said that foreign investors could also avail of the new tax rates, provided they had an establishment in the country or were investing equity into an Indian firm..

Responding to concerns about the impact of the foregone revenue on the Centre’s fiscal deficit target of 3.3% of the GDP for 2019-20, Ms. Sitharaman said: “We are conscious of the impact this will have. We will be taking all concerns on board to reconcile how the situation is now and how to take it forward,” and stressed that economic buoyancy “itself will generate more revenue generation through higher incomes and the tax basket would widen.’

The larger idea behind the exercise, the Minister said, was to eventually phase out all exemptions and incentives. On the other hand, surcharges on income tax would be eased out too, she hinted, in response to a query.

The Reserve Bank of India on Wednesday opted to break with convention by reducing the key policy rate, the repo rate, by 35 basis points (bps) to 5.4% as it focused monetary policy measures on helping revive demand to tackle a deepening economic slowdown. While central banks typically cut or raise interest rates in increments […]

Breather for a sector choking with stressed assets

The Supreme Court’s order on Tuesday quashing the February 12 circular of the RBI has come as a huge breather to the power sector which is staring at 66,000 mega watts (MW) of stressed power assets worth ₹1.8 lakh crore. “[The] SC order has provided great relief to the power sector’s stressed assets. This would […]

India’s GDP grew at 5.8% in the January-March 2019 quarter, dragging down the full year growth to a five-year low of 6.8%. The unemployment rate in the country rose to a 45-year high of 6.1% in 2017-18, as per official data released on the first day of the second term of the Modi government. Addressing […]