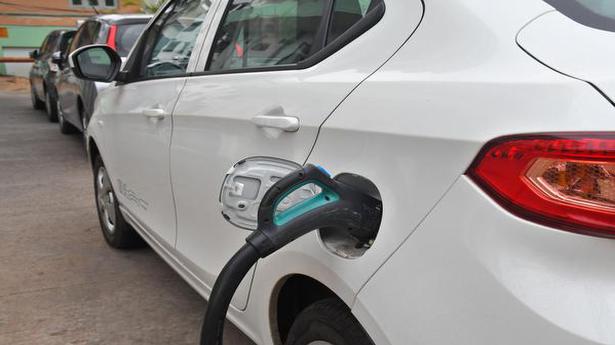 In a bid to encourage the adoption of electric vehicles, the Goods and Services Tax (GST) Council on Saturday decided to reduce the tax rate on electric vehicles from 12% to 5% and on EV chargers from 18% to 5% from August 1.

The council, which met via videoconference, also exempted the hiring of electric buses by local authorities from GST.

“The 36th GST Council Meeting was held here today via video conference under the chairmanship of Union Finance & Corporate Affairs Minister Nirmala Sitharaman,” the government said in a release. “The meeting was also attended by Union Minister of State for Finance & Corporate Affairs Anurag Thakur, besides Revenue Secretary Ajay Bhushan Pandey and other senior officials of the Ministry of Finance.”

The meeting was originally scheduled to take place on Thursday but was postponed as Ms. Sitharaman was busy with Parliament duties.

The council has also extended the deadline for filing of intimation for availing of the Composition Scheme, in Form CMP-02 to September 30 from the earlier deadline of July 31.

The last date for furnishing the statement containing the details of the self-assessed tax in Form CMP-08 for the quarter April to June 2019 by taxpayers under the Composition Scheme has been extended to August 31 from July 31.

Fitch, which last week lowered India’s sovereign rating outlook to negative from stable, said it has factored in the outgo for additional fiscal stimulus while deciding on the rating action Source: thehindu.com Related

The Indian equity markets fell for the fourth consecutive session on Monday as investors remained jittery amid a mix of negative global and domestic news flow. The 30-share Sensex lost 491.28 points or 1.25% to close at 38,960.79. The index has lost nearly 1,000 points in the last four sessions. Among the Sensex pack, as […]