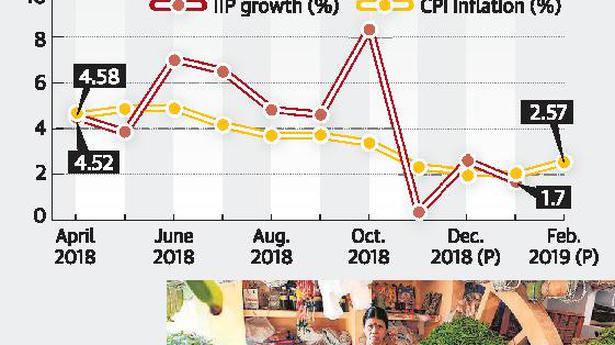 Industrial activity slowed in January 2019 growing by just 1.7% due in large part to a deceleration in the manufacturing, electricity, and capital goods sectors, official data released on Tuesday showed. In a separate release, government data showed that retail inflation in February snapped a four-month declining trend by rising to 2.57%.

The Index of Industrial Production (IIP) saw growth slip below the 2% for the second time in three months in January, with the previous occurrence being the 0.32% growth seen in November 2018. Growth in the IIP was at 2.6 in December.

Within the IIP, the mining and quarrying sector was one of the only major sectors that saw growth accelerating, from a contraction of 0.39% in December to a growth of 3.9% in January.

“The sectors where the slowdown is happening are manufacturing and industry. Apart from services, all the sectors seem to be slowing.”

The construction sector witnessed the strongest growth of all the major sectors, of 7.9%, but this was still significantly slower than the 10% seen in December.

“By March, government spending usually expands, but this time the signs of that are not very prominent because they are trying to cut down on capital expenditure to meet the revised fiscal deficit target,” Mr. Srivastava added, saying an expansion in government spending would have meant a recovery in IIP growth in coming months.

Retail inflation, as measured by the Consumer Price Index (CPI), rose for the first time in five months in February to 2.57% from 1.97% in January, mainly due to firming food prices, official data showed. Inflation in food and beverages sector stood at -0.07% in February compared with -1.29% in January. “The upward movement was driven primarily by a sequential rise seen in various food groups, except in vegetables,” B. Prasanna, head, global markets group, ICICI Bank said.

“Core inflation moved down slightly as expected, reflecting easing of input costs, pricing powers and growing slack in the economy. The earlier spikes seen in rural health and education seem to have stabilised.”

“With inflation remaining below RBI’s target, inflationary expectations declining and growth profile weakening, RBI may front-load its monetary easing in the beginning of FY20,” said Devendra Kumar Pant, chief economist and senior director, India Ratings and Research. “However, with capacity utilisation still being low at 74.8% (2QFY18) and pending elections in April-May 2019, it is unlikely to spur investment demand in the economy.”

Any investment from investing entity or individual from any of the neighbour including China will be subject to approval from the government. Source: thehindu.com Related

Reserve Bank of India (RBI) Governor Shaktikanta Das on April 17 said the inflation is on a declining trajectory and could fall below the central bank’s 4% target by the second half of this fiscal amid challenges posed by Covid-19 pandemic. He said the consumer price index based retail inflation has fallen by 170 bps […]