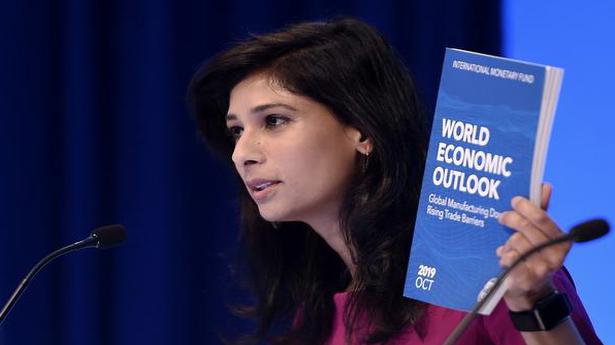 The World Bank-International Monetary Fund (IMF) annual meetings kicked off on a somber note, with the IMF downgrading global growth in 2019 to 3%, the slowest since the global financial crisis. India’s growth projections have also been downgraded to 6.1% and 7.0% in 2019 and 2020 respectively, down by 1.2 percentage points and 0.5 percentage points relative to April projections, owing to weaker than expected domestic demand.

“This is a serious climbdown from 3.8% in 2017,” the WEO said of the 2019 global growth projection. World output is projected to increase to a modest 3.4% in 2020 — still lower by 0.2% than the April projection. Unlike the slowdown this recovery is expected to be “precarious” and “not broad based” as per the IMF. Emerging economies will show increased growth — from 3.9% in 2019 to 4.6% in 2020, while advanced economies will slow to 1.7% in 2019 and 2020. The report called for defusing trade tensions, “reinvigorating” multilateral cooperation and “providing timely support to economic activity where needed”.

“In the case of India there has been a negative impact on growth that’s come from financial vulnerabilities in the non-bank financial sector and the impact that’s had on consumer borrowing and borrowing of small and medium enterprises,” the IMF’s chief economist Gita Gopinath said at a press briefing on Tuesday.

The projected growth in India’s case will be supported by lagged effects of monetary policy easing, cuts to corporate tax, measures to address environmental and corporate uncertainty, and government programs to boost rural consumption, as per the WEO.

India’s growth rate in the April-June quarter had hit 5% , the lowest in six years, as per government data. Consumption, investment and exports were down. The World Bank too on Sunday had projected that India’s growth rate would fall to 6.0% from 6.9% in 2018.

The Index of Industrial Production for India was 1.1%, month on month, in September — its lowest since February 2013.

“Appropriate steps have been taken …there is still a lot more do be done, including cleaning up of the balance sheets of regular commercial banks. The premise (for India’s growth projections) is that these particular bottlenecks will clear up,” Ms Gopinath said on Tuesday.

Faced with a slowdown in several sectors of the economy, Finance Minister Nirmala Sitharaman had announced a number of policy measures to support a recovery including slashing the corporate tax rate and a rollback of surcharges on foreign portfolio investors. This is expected to cost ₹1,45,000 crore a year — putting at risk the government’s ability to stick to its fiscal deficit target of 3.3% of GDP this year, a point Ms Gopinath alluded to at Tuesday’s briefing.

“On the fiscal side for India there have been some recent measures including the corporate tax cut. There has not been anything announced about how that will be offset through revenues at this point,” Ms Gopinath said.

The revenue projections look “optimistic” Ms. Gopinath said. “But it is important for India to keep the fiscal deficit in check.”

The WEO recommended broad based structural reforms to strengthen confidence and address cyclical weakness. The report called for a “credible fiscal consolidation path” over the medium term to bring down elevated public debt, supported by measures to enhance the tax base and rationalize subsidy-spending.

The report also recommended “reforms to hiring and dismissal regulations” to help incentivize job creation and “land reforms …to encourage and expedite infrastructure development.” It called for a strengthening of governance of public sector banks and greater efficiency of their credit allocation.

U.S. China Trade Truce should be “permanent and durable”

The IMF projected the U.S. would grow at 2.4% and 2.1% in 2019 and 2020 respectively – marginally revised upwards by 0.1 and 0.2 percentage points respectively from April projections. The Federal Reserve’s rate cuts and a two year budget deal ( a bipartisan budget package agreed in August), offset the negative impact of trade-related uncertainties, the WEO report said.

“We look forward to hearing the details of the trade agreement when they play out,” Ms Gopinath told the press on Tuesday, adding that world output would be negatively impacted by 0.8% had the October 15 U.S. tariffs on Chinese goods gone through and if planned December tariffs go through.

“We should emphasize that much of the negative impact comes from confidence effects which is why it is very important that these changes or the trade truce has a feature of being permanent and durable.”

The six-member Monetary Policy Committee (MPC) of the Reserve Bank of India reduced the repo rate for third straight policy meeting by 25 basis points to 5.75% to address growth concerns. The stance of the policy has also been changed from neutral to accommodative. The decision to reduce the interest rate was unanimous. “The MPC […]