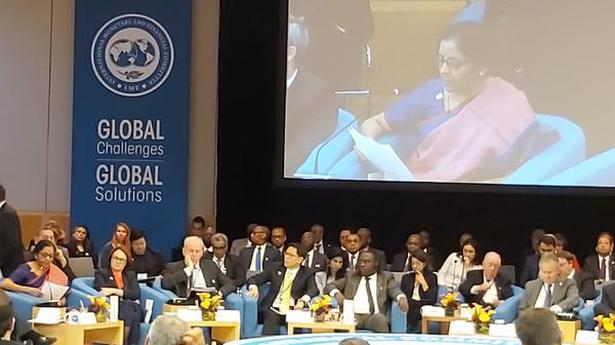 India on October 19 expressed its disappointment over the lack of support to increase the quota structure of the International Monetary Fund (IMF).

IMF quotas, which are the primary source of IMF funds, determine voting shares. Quotas are supposed to be reviewed every five years although these reviews can be delayed.

India views “the lack of adequate support for a quota increase under the 15th GRQ (General Review of Quotas) as somewhat disappointing”, Union Finance Minister Nirmala Sitharaman said in her address to the annual meeting of the IMF in Washington.

“We, however, consider this as a temporary setback. We hope that the discussions in the next [16th] Round of the GRQ would achieve success in terms of quota increase to take care of the Fund’s resource adequacy,” she said.

The quotas are distributed according to a four pronged formula that considers a member country’s GDP, its economic openness, its “economic variability” and international reserves.

The quota review, Ms. Sitharaman said, should also address the long-pending issue of under-representation of the Emerging Market and Developing Economies (EMDEs) and the dynamic economies in the IMF’s quota shareholding.

“The representation of member countries in the IMF should be in line with the changing economic realities for this institution to continue staying relevant,” she said.

Quota increases under the 16th round and also in the future rounds should be seen as an opportunity to realign quota shares in favour of EMDEs to allow them a more meaningful role in the governance of this Institution, the Finance Minister said.

According to Ms. Sitharaman, to ensure the stability of the international monetary and financial system, it is imperative that the IMF continues to remain at the centre of the Global Financial Safety Net.

For this to happen, the IMF should be able to maintain its current lending capacity to meet the needs of its members as well as meet such needs should a financial crisis occur, she said.

In this backdrop, there have been concerns about its resource adequacy, given that the 15th round of the GRQ is likely to conclude this year without any quota increase, she said.

This could seriously hamper the effectiveness of the IMF’s role in a crisis, as the only source which IMF could rely upon with certainty is its permanent resources, i.e. quotas, she said, noting that the IMF was conceived as a quota-based organisation and its legal as well as economic basis is enshrined in that concept.

Although acknowledging that the IMF’s borrowed resources (New Arrangements to Borrow and Bilateral Borrowing Agreements) have played a role in building its buffer, these remain temporary and backstop arrangements, she said.

“As such, creditor nations may themselves be in stress, in a crisis and may not able to come to the aid of IMF and its wider membership, thereby rendering these buffers ineffective. That this category of resources is going to remain valid for 1-3 years from now, unless extended or new agreements reached, is hardly comforting,” Ms. Sitharaman said.

A Mumbai court on Wednesday extended till October 14 the police custody of a former chairman of the Punjab and Maharashtra Cooperative (PMC) Bank and two directors of HDIL, arrested in connection with the alleged ₹4,355 crore scam at the bank. Housing Development Infrastructure Ltd (HDIL) chairman and managing director Rakesh Wadhawan and his son […]

The non-banking finance companies sector (NBFC), which is witnessing a crisis of confidence with some players defaulting on repayment, has raised a whopping ₹2.36 lakh crore in the last 12 months by selling loans. NBFCs and housing finance companies (HFCs) were forced to sell loans to mobilise resources as banks had almost stopped lending to […]

The Reserve Bank of India’s (RBI’s) inspection report has found out that State Bank of India (SBI) under-reported ₹11,932 crore of bad loans in FY19, which has pushed the bank to report net loss for the financial year 2018-19. The divergence in net non-performing asset (NPA) was also ₹11,932 crore, the bank informed the exchanges. […]