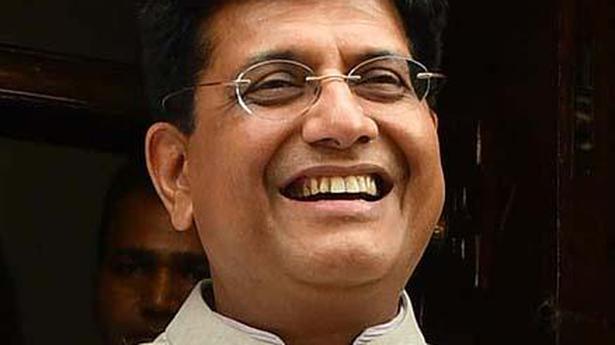 Union Commerce Minister Piyush Goyal on Wednesday told the Lok Sabha that the government was negotiating with the U.S. the issue of withdrawing the Generalised System of Preferences (GSP) status to Indian business houses.

The Minister said the process of negotiations should be left to “those in the room who are handling the talks”, but he also said the U.S. move was a sign that Indian businesses had grown and could compete globally.

“It was largely a non-discriminatory and unilateral concession that the U.S. started giving to the less developed or the least developed countries to the developing countries which, at that point of time, were in great deal of difficulty,” Mr. Goyal said.

“Over a period of time, that has certainly helped India also to export more products to the United States. But as we have seen in the last few years, the Indian industry is standing on its own feet, is becoming competitive and is able to compete with the rest of the world on its own terms, on the strength of its competitiveness and comparative advantages,” he said.

The Minister said while India exported over $50 billion or about ₹4 lakh crore, GSP benefits were given to an export basket worth ₹42,000 crore. From time to time, such issues like withdrawal of GSP may arise during trade negotiations but Mr. Goyal stated India had a strong and healthy relationship with the U.S. that would ensure stronger diplomatic and trade engagement.

Congress MP Manish Tewari, however, asked why the government failed to prevent the Trump administration from withdrawing the trade concessions.

“When this had been festering since 2016 and you had a number of rounds of negotiations with the U.S. Trade Representative, why was your government not able to handle the situation,” he asked.

Ayushman Bharat, the government run health insurance programme, on Saturday confirmed that there had been an attempted security breach. “There have been attempts to get illegal access to large medical data including sensitive personal information,’’ said Dr. Indu Bhushan, CEO Ayushman Bharat – Pradhan Mantri Jan Arogya Yojana. Alerted about the intrusion 48 hours ago, […]

Prime Minister Narendra Modi on Tuesday called Mahagathbandhan (grand alliance) leaders mahamilavati (contaminated), “who are asking for proof of our brave sons’ attack on terrorists in their own turf.” He addressed two meetings in Bihar during the day. “After the Pulwama terror attack, the brave sons of India displayed their valour… for the first time […]

AICC president Rahul Gandhi on Thursday filed his nomination from the Wayanad Lok Sabha constituency. Mr. Gandhi, accompanied by his sister Priyanka Gandhi Vadra and senior Congress leaders including K.C. Venugopal and Mukul Wasnik, submitted the papers before the district Collector A.R. Ajayakumar at the district headquarters here. Heavy security was in place in and […]