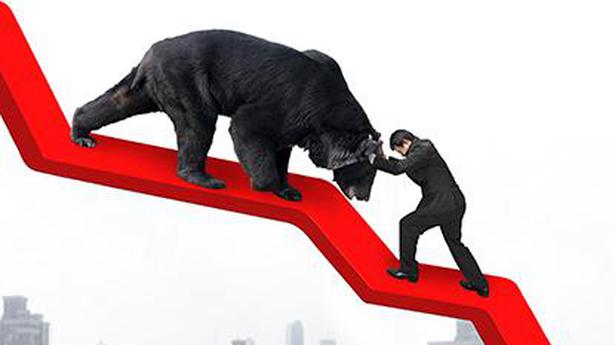 Indian benchmark equity indices lost ground for the sixth consecutive session on Wednesday as a mix of global and domestic factors made investors jittery even as foreign investors turned net sellers in the last few trading sessions.

On the global front, the escalation of U.S.-China trade war has led to a selling spree across equity markets globally, while on the domestic front, a largely lacklustre corporate results season has made investors cautious ahead of the election results.

Market participants are of the view that the ongoing weakness in the markets had led to many investors and traders being wary of taking fresh positions, especially since the election results are only a few trading sessions away.

“Momentum failure at higher levels has had a significant impact on the broader markets,” said Sahaj Agrawal, head of derivatives, Kotak Securities.

“Breach of intermediate support at 11,550/11,450 is expected to aggregative short-term selling pressure. On the downside, 11,000-11,100 is expected to be tested before we witness an aggressive recovery,” he added.

Incidentally, the India VIX, which is considered as a barometer of near-term volatility, is trading near its 52-week high of 27.84, which it touched on May 6 with a single-day gain of 10%. On Wednesday, it closed marginally lower at 26.37.

Meanwhile, global markets continued to trade weak with the benchmarks of China, Hong Kong, Japan, Taiwan and Indonesia all ending the day in the red.

Back in India, 1,857 stocks lost ground on Wednesday which was nearly three times the number of gainers at 634.

Within the Sensex pack, heavyweights such as Reliance Industries, Tata Motors, State Bank of India, Vedanta, Yes Bank and Sun Pharmaceuticals, among others, ended in the red.

It weakened by 49 paise, or 0.71%, this week after the U.S.’ threat to increase tariffs on $200 billion of Chinese imports triggered a global sell-off in riskier assets.

The 15th Finance Commission on Thursday said that India’s GDP numbers suggest a continued high growth trend in the medium term even though they have fluctuated in the last few years. The Commission and its Members made these observations during a meeting with senior officials in the Ministry of Finance, including Finance Secretary Subhash Chandra […]

The Non-Performing Assets (loans overdue for >90 days) ratio for all commercial banks declined in FY19 after rising for seven consecutive years. However, in the first half of FY20, stressed assets (potential NPAs) inched up. Moreover, the NPA ratio of Indian banks is the poorest among emerging economies. The share of Gross Non-Performing Assets (GNPAs) […]