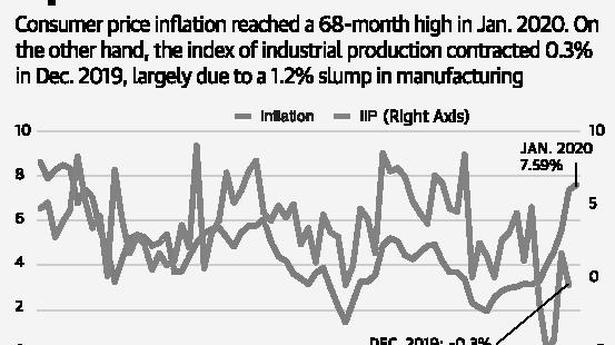 A day after Finance Minister Nirmala Sitharaman listed a recovery in industrial output as one of the “green shoots” in the economy, government data showed industrial production contracted again in December 2019, even as retail inflation surged to an almost six-year high of 7.59%.

This is the highest inflation rate since the NDA government came to power at the Centre in May 2014.

The Index of Industrial Production (IIP) recorded a negative growth of 0.3% in December in comparison to the same month the previous year, according to the National Statistical Office (NSO). The IIP had shown a positive growth of 1.8% in November, after three consecutive months of contraction. IIP contraction came largely on the back of a 1.2% slump in the manufacturing sector. In fact, 16 out of 23 industry groups in manufacturing saw negative growth. The production of capital goods fell by 18.2% in comparison to the previous year.

The electricity sector also contracted marginally. The mining sector, on the other hand, saw growth of 5.4%.

NSO’sConsumer Price Index (CPI) data showed retail inflation had surged from 7.35% in December 2019 to 7.59% in January 2020, mostly due to costlier food items.

The last time the inflation rate were higher than this was in May 2014, when retail inflation stood at 8.33%.

Vegetables remained costly, showing a 50% inflation rate, despite the recovery in onion prices. The high prices of proteins — pulses, meat, fish and eggs — also contributed to the high rate of food inflation. This is the fourth straight month that retail inflation has crossed the Reserve Bank of India’s medium term target of 4%.

Bangladesh and Nepal are estimated to grow faster than India in 2019, according to the World Bank, which said that overall growth in South Asia is projected to slow down this fiscal in line with a global downward trend. Pakistan’s growth rate is projected to deteriorate further to a mere 2.4% this fiscal year, as […]