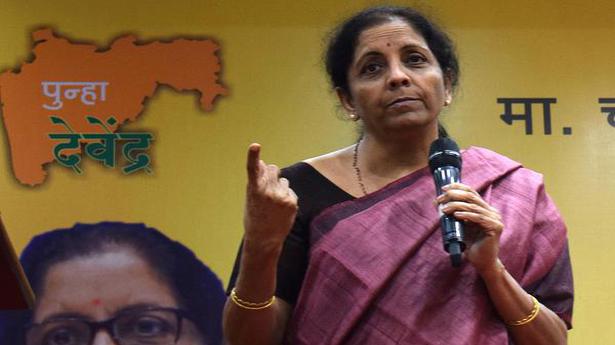 Union Finance Minister Nirmala Sitharaman said on Monday that all the key reforms such as Goods and Services Tax (GST), Insolvency and Bankruptcy Code (IBC) and Aadhaar had taken place in the past five years.

Ms. Sitharaman’s comment came in response to the critical observation of the economy made by her husband and economist Parakala Prabhakar, who said the Bharatiya Janata Party (BJP) should adopt the P.V. Narasimha Rao-Manmohan Singh economic model to boost the flagging economy.

In an article in The Hindu, he said that “in economic policy, the party mainly adopted Neti Neti (Not this, Not this), without articulating what was its own Niti (policy).”

“All the reforms have taken place between 2014 and 2019 [during the NDA rule] and the deep reforms like the GST were not introduced by the Congress. IBC and Aadhaar were introduced and amendments were carried out. The Ujjawala scheme benefited 8 lakh women. Many changes were made to the tax structure. After October 1, start-ups will now have to pay the lowest tax in India. All these should have also been praised,” she said, post a bankers’ meet.

Pakistan has formally called for an emergency meeting of the UN Security Council (UNSC) to discuss India’s move to revoke the special status to Jammu and Kashmir, Foreign Minister Shah Mahmood Qureshi said on Tuesday. In video message, Mr. Qureshi said that he sent a formal letter to the president of the UNSC through Permanent […]

As part of the first step towards overhauling the dated content on many Doordarshan channels, the Prasar Bharati Board on Friday approved a new content acquisition policy. The move will allow the public broadcaster to acquire the rights of series such as the Mahabharata and the Ramayana that it telecast in the past but of […]

India has the potential for “very rapid” economic growth over the next decade which will lift people out of poverty and allow the government to invest in health and education priorities in an “exciting way”, billionaire philanthropist and Microsoft co-founder Bill Gates has said. Mr. Gates, the world’s richest person, specifically complimented India’s Aadhaar identity […]