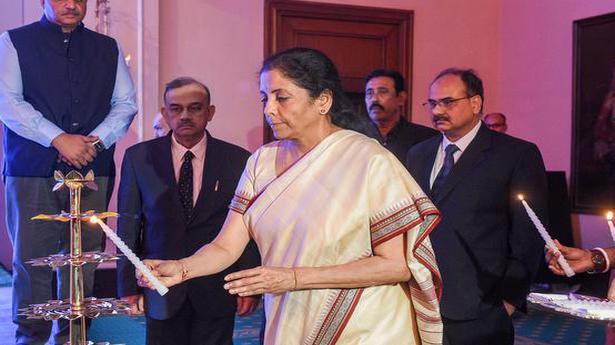 Union Finance Minister Nirmala Sitharaman on February 9 said the Centre, in the Budget, has laid the foundation of increasing consumption while ensuring that the government’s investment is deployed to build infrastructure leading to a $5 trillion economy by 2024-25.

She also pitched for rationalisation of GST rates once a year and not every three months as was the trend so far.

“I think we have laid the foundation for increasing consumption, ensuring that capex (capital expenditure) and government’s investments will go towards spending on building of assets in infrastructure which should have cascading effects both in the short term and in the long term,” Ms. Sitharaman told reporters.

She said, “In order to address rural distress, 16 focused action points have been announced in the budget. So I expect all this will lead to a five trillion dollar economy.”

Asked about what West Bengal has received from the budget, she said, “I do not know how I answer this question of kisko keya mila (which state gets what). I am looking at the point of macroeconomic stability, building assets in the country, money directly going to hands of individuals because of reduced tax rates and so on.”

Announcements were made in the Budget about various projects which are happening in different states, the finance minister said.

India’s aspiration to become a $5 trillion economy depends critically on promoting “pro-business” policy that unleashes the power of competitive markets to generate wealth on the one hand, and weaning away from “pro-crony” policy that may favour specific private interests, especially powerful incumbents, on the other, according to the Economic Survey2019-20 tabled by Union Finance […]

Engineering and construction major Larsen & Toubro (L&T) is likely to miss its FY20 order inflow guidance of 10-12%, reflecting the economic slowdown. The company has received just four orders in the third quarter so far, with three of them worth below ₹2,500 crore each and just one contract worth over ₹7,000 crore. The company […]