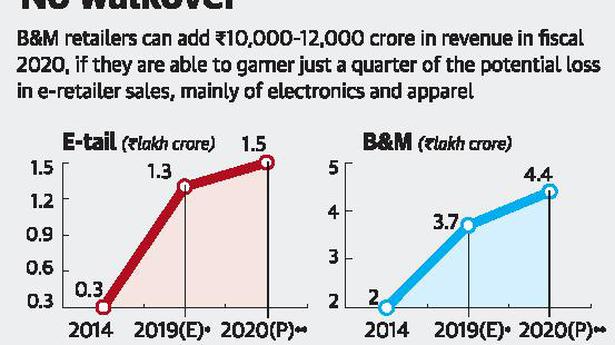 The Department of Industrial Policy & Promotion’s recent clarification on the foreign direct investment (FDI) policy for e-retail has an unexpected beneficiary — brick and mortar (B&M) retail.

The more specific and stringent FDI guidelines require large e-retailers to make changes in their business models in a short timeframe.

These changes come just as e-retail sales have seen phenomenal growth, averaging 40% a year between fiscals 2014 and 2018 and reaching the ₹1 lakh-crore mark. That’s thrice as fast as the B&M segment, which grew at a 13% clip to ₹3.2 lakh crore. Deeper market penetration and attractive price-tags — helped generously by foreign direct investments of over ₹95,000 crore in the past four fiscals — drove online sales.

Now, following the DIPP clarification, e-retailers have started tweaking supply chains and business models, including adoption of the franchisee model.

This is leading to higher cost of compliance. And growth will temporarily slow as the players repurpose. Incorporating all the changes was not possible in the less than 40 days that the e-retailers were given. The first few weeks of February have witnessed some slowdown in their sales. However, sales are gradually recovering from March 2019, as e-retailers are reorienting business models and supply chain arrangements.

For perspective, the top two players, accounting for about 70% of e-retail industry revenue, generate about half their sales through impacted group companies. And, changes are required across parameters.

In contrast, Crisil estimates that B&M retailers can add ₹10,000-₹12,000 crore in revenue in fiscal 2020 if they are able to garner just a quarter of the potential loss in e-retailer sales, mainly of electronics and apparel. That would crank up their revenue growth 150-200 basis points (bps) to about 19%, compared with Crisil’s earlier expectation of 17%.

While near-term drags would ease gradually, the fact that India’s organised retail market is highly underpenetrated at just 7.8% compared with 85% in the U.S., 35% in Brazil, 30% in Indonesia and 20% in China, means there’s huge headroom for growth.

Penetration of organised retail, which increased from 6.5% to 7.8% over the three fiscals through 2018, is expected to improve further to 9.5% through fiscal 2021 as the overall organised retail segment grows at 20-22% annually, riding on rising incomes and aspirational demand in Tier II and Tier III cities. An analysis of 87 B&M retailers rated by Crisil shows credit profiles are slated to benefit from healthy growth prospects and improving credit metrics. For instance, the debt-to-EBITDA ratio of B&M retailers, which improved to about 2.1 times in fiscal 2018 from 3.7 times in fiscal 2016, is likely to improve further to below 1.5 times by fiscal 2021.

To summarise, the policy clarifications have helped partially level the field for B&M retailers.

The Reserve Bank of India (RBI) has extended the restrictions imposed on Punjab and Maharashtra Cooperative Bank by another three months, till June 22. “It is hereby notified for the information of the public that the validity of the directive dated September 23, 2019, as modified from time to time, has been extended for a […]

As part of measures to ease fund-raising for companies amid the ongoing volatility due to the COVID-19 pandemic, the Securities and Exchange Board of India (SEBI) has allowed listed companies to raise funds after six months of making a buyback offer. Under normal circumstances, SEBI norms stipulate a minimum gap of 12 months between a […]