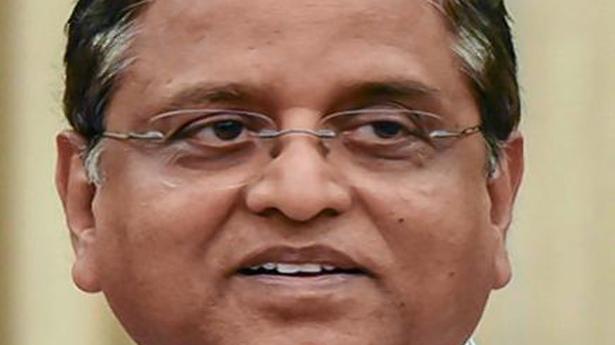 Finance Secretary Subhash Chandra Garg on Friday defended the government’s decision to bring the fiscal deficit down to 3.3% this year, saying this would free up additional resources for the private sector to borrow and invest.

He also acknowledged the industry’s concerns that payments by the government for services were delayed, creating a liquidity crunch in the system.

“There is a clear statement in the Budget that the private sector will drive growth,” Mr. Garg said, while speaking at a CII event.

“If the government uses up all the domestic savings, then there is nothing left for the private sector.”

Mr. Garg explained that a 1% relaxation in the fiscal deficit means an additional ₹2 lakh crore that can be used as investment.

“But this will mean that the current 80-85% of savings that is used by the government will become 90-95%,” he said. “What will be left for the private sector? You will not have any money [to borrow].”

The Finance Secretary also said that one of the reasons that the Reserve Bank of India’s rate cuts were not being transmitted by the banks was because they didn’t have enough liquidity left to adequately lend to the private sector after accommodating government borrowing.

Therefore, he said that the decision for the government to start borrowing overseas was a good one because it would mean there would be more resources available for the domestic private sector to utilise.

Members from CII raised the issue of government bodies delaying payments to service providers, leading to a liquidity block in the private sector. Mr. Garg acknowledged this and said that the government was setting up a payments portal.

“It will take some time to set up (the portal), but it will increase transparency as to whose payments are delayed, how long, etc,” he added.

After skipping the last Regional Comprehensive Economic Partnership (RCEP) meeting in August, Commerce Minister Piyush Goyal will attend the seventh RCEP Ministerial meeting in Thailand that starts on Sunday, the Ministry of Commerce confirmed on Friday. India, however, would maintain a strict stance on the RCEP negotiations and consider signing an agreement only if its […]

While training for insurance, I heard the following story to explain the concept of insurance. Many years ago, there was a human settlement on a hilly region of China. During summer, menfolk would descend the hills, cross the dry river bed and set up tents on the plains. Next, they would start ploughing the land, […]

The Goods and Services Tax (GST) collection in October declined to ₹ 95,380 crore, as against ₹ 1,00,710 crore in the same month a year ago, as per government data released on Friday. This is the third consecutive month when GST mop-up remained below the ₹ 1 lakh crore mark, despite October being a festive […]