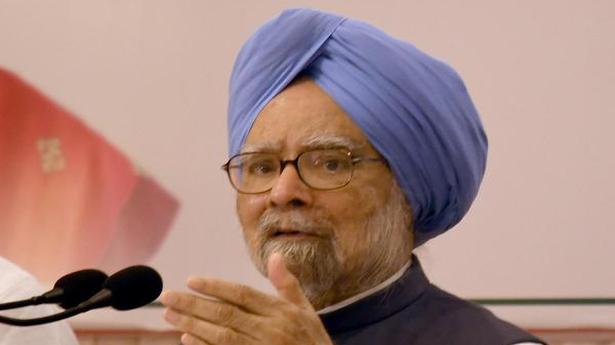 Former Prime Minister Manmohan Singh on Thursday appealed the Narendra Modi government to see to it that 16 lakh customers of the scam-hit Punjab & Maharashtra Cooperative Bank get some relief.

Exception should be made to the restriction on withdrawals in the case of depositors who have pressing medical needs such as kidney transplant, he said at a press conference here.

The issue of the scam at the bank — pegged by the investigative agencies at ₹4,355 crore — would rock Parliament’s winter session, Dr. Singh said.

The Reserve Bank of India has capped deposit withdrawals at ₹40,000 for account holders because of liquidity issues. The bank’s troubles are attributed to mammoth loan defaults by real estate group HDIL.

“I do expect the Government of India, the RBI and the Government of Maharashtra to put their act together and provide a credible, pragmatic and effective solution to this case where 16 lakh depositors are crying for justice,” Dr. Singh said.

The economist-turned-politician also said that people are dying of shock, in an apparent reference to three PMC Bank depositors dying this week — one of them allegedly committing suicide.

Among the depositors, kidney patients waiting for transplant should be allowed to access their funds beyond the RBI-imposed cap, and if the need be, aid should be given from the Prime Minister’s Relief Fund for meeting medical needs, he said.

Dr. Singh, who was once governor of the Central bank before his entry in politics, maintained that the RBI is a “great national institution”, and said that he hopes that it will find the required solution to the crisis.

But the government must strengthen the deposit insurance architecture too, he said.

A spectator was gored to death by a bull during Hori Habba,a bull-catching event held in Chikkamagadi village in Shikaripur taluk on Monday. The deceased has been identified as Ashok, 40, a resident of the same village. He was standing with his friends near the point where the bulls were released into the ring. The […]

Balakot: ‘Demand for proof is medieval’

Expressing his ire over the demand for dead bodies in the Balakot airstrike, film-maker Anand Patwardhan said here on Sunday that such a demand was ‘medieval’. During an interaction following the screening of his new documentary film Reason/Vivek at St. Aloysius College, Mr. Patwardhan said that both supporters of the strike and those demanding proof […]

As India is under lockdown for a week now, the government has said the 21-day period will not be extended. The country is seeing a spurt in the number of coronavirus cases, with Gujarat, Punjab, Telangana and West Bengal reporting deaths. COVID-19 has claimed 49 lives in India as of March 31, according to data […]