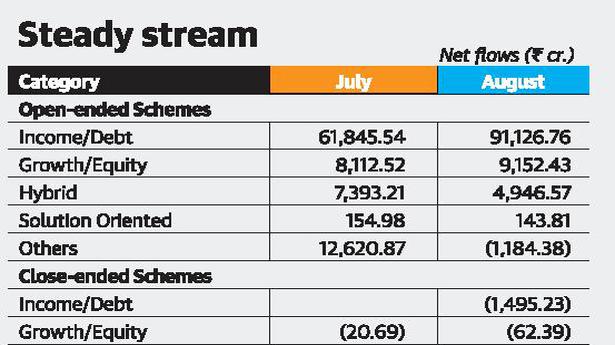 Mutual fund assets registered a rise in the month of August, largely aided by strong flows in liquid schemes even as retail flows remained flat and that of systematic investment plans (SIPs) witnessed a marginal dip.

According to the Association of Mutual Funds in India (AMFI), the total assets under management (AUM) of the mutual fund industry was pegged at ₹2.81 lakh crore, marginally higher than July’s ₹2.78 lakh crore.

Among the different categories of funds, liquid funds registered the highest quantum of inflows at nearly ₹79,500 crore, while the overall debt/income category saw net inflows of nearly ₹91,127 crore, higher than the previous month’s flows of ₹61,845.54 crore.

Equity funds also witnessed a rise in terms of inflows with August net flows pegged at ₹9,152.43 crore as against July’s ₹8,112.52 crore.

The total number of folios rose to 8.54 crore in August, from July’s 8.48 crore. The folio count has risen 11% from a year earlier.

On the outlook for September, Mr. Venkatesh said that while liquid funds might see little volatility due to quarter-end phenomenon, other categories of funds should see a positive trend with SIP numbers also expected to be robust.

The Reserve Bank of India (RBI) has expressed concern over rising bad loans from Pradhan Mantri MUDRA Yojana (PMMY), a scheme announced by Prime Minister Narendra Modi in April 2015, which offers faster credit, with ticket sizes starting from ₹50,000 and going up to ₹10 lakh, to small businesses. “While such a massive push would […]

Union Finance Minister Nirmala Sitharaman announced a slew of measures on August 23 to prop up the slowing economy. Addressing a press conference, Ms. Sitharaman sought to dispel doubts over the economy and the government’s growth agenda. Announcing that the global GDP growth may be revised downwards from the current estimate of 3.2%, she said […]