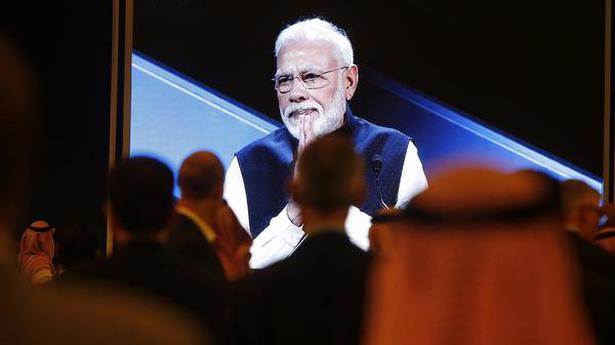 Prime Minister Narendra Modi on October 29 invited Saudi companies to invest in India’s energy space saying that the government has set a target of $100 billion investment in the sector.

Addressing a session at the Future Investment Initiative 2019 in Riyadh, Mr. Modi said India offers a huge investment opportunity in the infrastructure sector also as he emphasised that the country aims to be a $5 trillion economy in the next five years.

In the infrastructure sector alone, the government aims to have an investment of $1.5 trillion in the next five years.

Asking businesses to take advantage of the startup movement, Mr. Modi said, India has become the third largest startup ecosystem in the world and offers the highest return to investors.

India is focusing on skill development by skilling and reskilling people and 400 million people would be provided training in the next 3-4 years, he added.

According to the Prime Minister, manpower and talent mobility should be included in the international agreements, which should not be only restricted to goods.

He also said that the direct benefit transfer scheme has help the government save $20 billion.

Pakistani troops on Wednesday shelled forward posts along the Line of Control (LoC) in Rajouri district of Jammu and Kashmir, an official said. The Indian Army effectively retaliated. “At about 0700 hours, the Pakistan Army initiated unprovoked ceasefire violation by firing of small arms and intense shelling with mortars in Keri sector”, the defence PRO […]