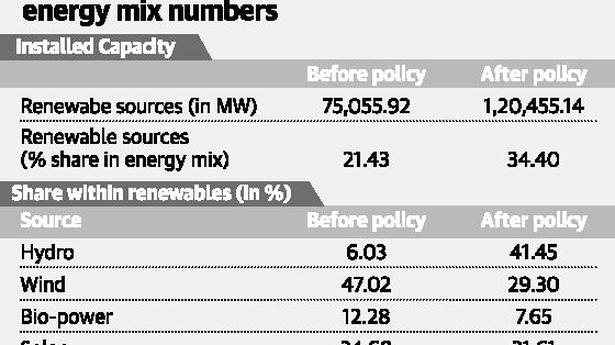 While the government’s decision to re-classify large hydroelectric projects as renewable energy will certainly help the sector, the move will also go a long way in meeting the targets set by it for the sector, according to analysts.

Earlier this month, the Union Cabinet approved a new hydroelectricity policy that, among other things, included large hydro projects within the ambit of renewable energy.

India’s renewable energy sector had an installed capacity of 75,055.92 MW as of February 2019, according to data with the Central Electricity Authority. This made up about 21.4% of the overall energy mix, with the rest coming from thermal, nuclear and large hydro sources.

With the inclusion of large hydro in renewable energy, the energy mix changes drastically.

It must be noted that this is a purely cosmetic change. No additional resources have been created through this policy. It is a reclassification of existing capacity.

The policy has meant a drastic change in the renewable energy mix as well. Whereas earlier, wind energy contributed nearly 50% of all renewable energy capacity, it will now make up only 29.3%. Similarly, solar energy’s share will fall from 34.68% to 21.61%. The hydro sector, however, will see its share grow from just over 6% to over 41%.

“The policy has been in the works for quite some time,” Sabyasachi Majumdar, senior vice president and group head — corporate ratings, ICRA said. “There has to be an ideal thermal, hydro and renewables mix. Each of the three sources has its own pluses and minuses. Hydro is one of the few sources where you can get peaking power.

“There has been a huge imbalance in the thermal-hydro mix for the last few years because of a sharp growth in thermal and complete stagnation in hydro.

“The basic idea is to ramp up hydro because it provides grid stability which a renewable source like wind and solar do not. The key reasoning seems to be providing grid stability and a better energy mix.”

Other analysts, however, say that the government has additional reasons for bringing in such a re-classification, which have more to do with the renewable energy targets it set for itself.

“As you know, we are still pretty far from reaching the 175 GW renewable energy target by 2022,” a sector analyst said on the condition of anonymity.

“This has been quite a high-profile target because the government has been trumpeting it at every chance. It will look bad if it fails to reach it.

“So, apart from the good to the sector, one main reason for the re-classification of hydro as renewables is to add all that capacity to the renewable energy kitty.”

Other commentators pointed out that another benefit from the policy could be the effect on the stock prices of State-run hydroelectric companies such as NHPC and SJVN at a point when the government is looking to sell its stake in these companies.

NHPC, however, has formally denied that it has been approached by any company looking to buy stake in it.

The government is planning to launch monthly lottery offer under the Goods and Services Tax (GST) from April 1 by conducting lucky draws for invoices of all business to customer (B2C) transactions. The offers would range between ₹10 lakh and ₹1 crore, said an official. The lottery scheme is being envisaged by the revenue department […]

Need to grow at 10% for unemployment to go : Subramanian Swamy

The economy needs to grow at 10% a year — and it can — for unemployment to be removed in 10 years, according to Member of Parliament Subramanian Swamy. “What the country needs is 10% growth annually, which is within reach,” Dr. Swamy said, while speaking at the launch of his book ‘Reset: Regaining India’s […]

Markets regulator SEBI on Monday said it has signed a pact with Kazakhstan’s Astana Financial Services Authority (AFSA) for mutual co-operation and technical assistance. The objective of the bilateral memorandum of understanding (MoU) is to strengthen cross border co-operation in the area of securities regulation, SEBI said in a press release. “This will facilitate mutual […]