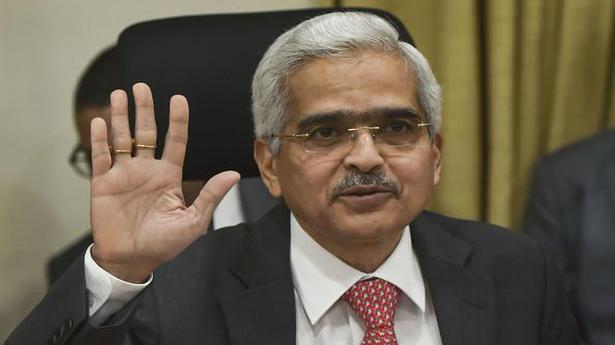 The Reserve Bank of India will issue a new set of guidelines for resolution of bad loans within the next three-four days, replacing the 2018 circular that was quashed by the Supreme Court, governor Shaktikanta Das said on Thursday.

The apex court had on April 2 struck down the stringent RBI circular declaring it ‘ultra vires’, issued on February 12, 2018, for resolving bad loans, under which a company could be labeled a Non-Performing Asset if it missed repayment for even a day. Banks were asked to find a resolution within 180 days or else it should be sent to bankruptcy courts.

“A revised circular will be issued very shortly. Very shortly means, in a matter of, may be, next three or four days,” Mr. Das told reporters after the second bi-monthly monetary policy statement wherein he announced a third consecutive rate cut.

“It has taken more time than we anticipated because it involved examining various legal issues and wide-ranging stakeholder consultations,” he said.

Under the February 12 framework, banks were asked to disclose defaults of even of a day and to find a resolution plan within 180 days in case of large account of ₹2,000 crore and above, failing which, it would be send for bankruptcy. Power sector companies, which were affected the most by the circular, argued that their outstanding loans of  ₹5.65 lakh crore (as of March 2018) were a result of factors beyond their control such as unavailability of fuel and cancellation of coal blocks by the apex court/government and non-payment by state-run discoms.

GMR Energy, RattanIndia Power, Association of Power Producers, Independent Power Producers Association of India, Sugar Manufacturing Association from Tamil Nadu and a shipbuilding association from Gujarat had moved different courts against the circular. The petitioners had argued that applying a 180-day limit to all sectors of the economy without going into the special problems faced by each sector would treat unequals equally and would be arbitrary and discriminatory, and therefore, violative of Article 14 of the Constitution.

The Supreme Court order came as a response to a petition filed by the central bank challenging the Allahabad High Court order which had asked it and the Finance Ministry to treat the power sector NPAs separately, as their woes were mostly driven by external factors.

According to an earlier estimate by the rating agency ICRA, the total debt due to the February 12 circular is around ₹3.8 lakh crore across 70 large borrowers, of which ₹2 lakh crore across 34 borrowers are in the power sector alone. Of that, 92 percent of the debt was classified as non-performing by banks as of March 2018 and it also made provisions of over 25 -40 percent on these accounts, the rating agency had said.

Watch | LIC through the years

During the Budget 2020 speech, Finance Minister Nirmala Sitharamam said LIC was set to go public. Despite the presence of 24 private companies, LIC has the highest market share in the life insurance segment in India. The history of LIC goes back several decades. 1818 Life Insurance in its modern form came to India from […]

A high-level panel led by former RBI governor Bimal Jalan, set up to decide the appropriate capital reserves that the central bank should maintain, finalised its report on Wednesday. The six-member Jalan panel was appointed on December 26, 2018 to review the Economic Capital Framework for the RBI. The panel has finalised its report and […]

State-owned oil marketing companies (OMCs) increased prices of petrol and diesel across the country on Monday, a day after the last phase of Lok Sabha polls concluded. This could mark the beginning of a rising trend in fuel prices as they are once again aligned to the rising global oil prices. Petrol prices rose 8-10 […]