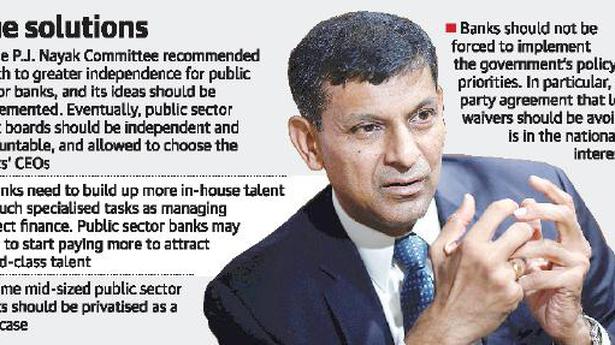 The banking system is overburdened with non-performing loans. Much of the problem lies in public sector banks, but private sector banks like ICICI and Axis Bank have not been immune.

Some of the malaise comes from a general need to improve governance, transparency and incentives in the system. However, the difficulties in even some private banks suggest that ‘simple’ solutions like privatising all public sector banks may be no panacea.

At any rate, banking reforms should tackle four broad areas: 1. Clean up banks by reviving projects that can be revived after restructuring debt. 2. Improve governance and management at public sector banks. 3. De-risk banking by encouraging risk transfers to non-banks and the market. 4. Reduce the number and weight of government mandates for public sector banks, and for banks more generally.

Is privatisation of public sector banks the answer? Much of the discussion on privatisation seems to make assumptions based on ideological positions.

Certainly, if public sector banks are freed from some of the constraints they operate under (such as paying above the private sector for low-skilled jobs and paying below the private sector for senior management positions, having to respond to government diktats on strategy or mandates, or operating under the threat of CVC/CBI scrutiny), they might perform far better. However, such freedom typically requires distance from the government. So long as they are majority-owned by the government, they may not get that distance.

At the same time, there is no guarantee that privatisation will be a panacea.

Some private banks have been poorly governed. Instead, we need to recognise that ownership is just one contributor to governance, and look at pragmatic ways to improve governance across the board.

There certainly is a case to experiment by privatising one or two mid-sized public sector banks and reducing the government stake below 50% for a couple of others, while working on governance reforms for the rest.

Rather than continuing a never-ending theoretical debate, we will then actually have some evidence to go on.

Some political compromises will be needed to allow the process to go through, but so long as the newly privatised banks are not totally hamstrung in their operational flexibility as a result of these compromises, this will be an experiment worth undertaking.

An alternative proposal to improve governance is to merge poorly managed banks with good banks. It is uncertain whether this will improve collective performance – after all, mergers are difficult in the best of situations because of differences in culture. When combined with differences in management capabilities, much will depend on whether the good bank’s management is strong enough to impose its will without alienating the employees of the poorly managed bank.

We now have two experiments under way: State Bank has taken over its regional affiliates, and Bank of Baroda, Vijaya Bank and Dena Bank have been merged. The performance of the latter merger will be more informative. Thus far, market responses suggest scepticism that it will play out well. Time will tell.

Too many risks devolve on to banks, including risks such as that of interest rate volatility that banks elsewhere typically lay off in markets. Too much project risk stays with banks because other financial instruments such as equity and subordinate debt cannot be issued cheaply.

Risk also returns through the back door.

For example, banks do not make loans to housing developers because of their intrinsic risks.

But they do make loans to non-bank financial companies, which make loans to developers. To prevent risk from returning to bank balance sheets, NBFCs must be able to raise money directly from markets.

Financial market development, addressed in Eswar Prasad’s note in this volume, will help banks focus more on risks they can manage better and thus bear more effectively, while sharing or laying off what they cannot.

Banks will have to complement financial markets rather than see them as competition. The use of financial technology will be especially helpful to them in this endeavour.

Reduce the number and weight of government mandates for PSBs

Uncompensated government mandates have been imposed on public sector banks for a long time. This is lazy government – if an action is worth doing, it should be paid for out of budgetary resources.

Mandates also are against the interests of minority shareholders in public sector banks.

Finally, it does not draw the private sector in to compete for such activities. The government should incentivise all banks to take up activities it thinks desirable, not impose it on a few – especially as the privileges associated with a banking licence diminish.

Along these lines, requirements that banks mandatorily invest in government bonds (the SLR requirement) should continue to be reduced, substituting them instead with the liquidity coverage ratios and net stable funding ratios set by Basel. Among the more dangerous mandates are lending targets and compulsory loan waivers.

Loan waivers, as the RBI has repeatedly argued, vitiate the credit culture and stress the budgets of the waiving state or Central government. They are poorly targeted, and eventually reduce the flow of credit.

Agriculture needs serious attention, but not through loan waivers. An all-party agreement to this effect would be in the nation’s interest.

Finally, the government should keep its banks well capitalised, conditional on improvements in governance and management efficiency. This is simply good accounting practice, for it prevents the government from building up contingent liabilities on bank balance sheets that a future government will have to pay for.

(Excerpted with permission from Juggernaut)

The Telecom Regulatory Authority of India (TRAI) on Wednesday released a consultation paper on steps to bring in more transparency in communication of tariffs offered by service providers to the subscribers. The issues raised for consultation include whether a specific format should be prescribed for publishing tariff, how the published tariff would be communicated to […]

Centre must not look upon the Reserve Bank as a cash cow: ex-RBI board member

The central government being fiscally dependent on the Reserve Bank of India (RBI) is undesirable, according to Dr. Indira Rajaraman, former member of RBI’s central board. Delivering the Nani Palkivala Memorial lecture in the city on Saturday, she said, “The ₹68,000 crore that the RBI has paid to the government in the form of dividend […]

A majority of economists expect a U.S. recession in the next two years, but have pushed back the onset amid Federal Reserve actions, according to a survey released on August 19. The National Association for Business Economists (NABE) found far fewer experts now think the next recession will start this year compared to a survey […]