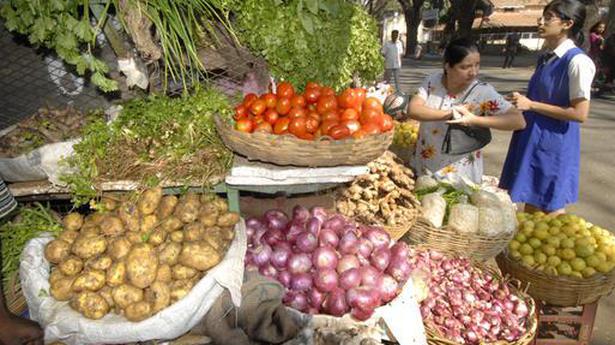 Retail inflation jumped to over five-and-a-half-year high of 7.59% in January on persistently high prices of vegetables, pulses and protein-rich meat and fish, government data showed on Wednesday.

The overall food inflation during January this year stood at 13.63%, slightly lower than 14.19% in the previous month, showed the data released by the National Statistical Office under the Ministry of Statistics and Programme Implementation.

Inflation in vegetables spurt to 50.19% in January this year, while that for pulses and products, it rose to 16.71%.

Among protein-rich items, prices of meat and fish went up by 10.50% during the month, while egg prices were higher by 10.41% against the year-ago period.

The food and beverages category showed an inflation print of 11.79%, according to the data.

“The internals of the food inflation are worrying, given a broad-based uptick across categories that tend to be sticky, such as proteins, and a narrower-than-expected reduction in inflation for vegetables.

“Moreover, the fairly broad-based rise in the core inflation to 4.1% in January 2020, driven by various services, is a cause for concern,” said Aditi Nayar, principal economist, ICRA.

Mr. Nayar added that regardless of the level of retail inflation, the stance of the RBI for the monetary policy is likely to be retained as accommodative, for as long as the MPC considers the output gap to be negative. “The timing and magnitude of the next rate cut will depend on how quickly inflation appears to be reverting back towards 4%.”

Rahul Gupta, head of research (currency), Emkay Global Financial Services, said, “It is the consecutive second month that the CPI has breached upper band of the RBI’s inflation target… if inflation continues to hover above 6%, we don’t expect the RBI (Reserve Bank of India) to cut interest rate or change its accommodative policy stance,” said.

The outlook for India’s reeling economy has worsened again as business activity slows and COVID-19 infections soar, and will probably prompt the Rese Source: thehindu.com Related

Huawei founder says revenue will be $30 billion below forecast

Huawei’s founder said on Monday that the Chinese telecom giant’s revenue will be $30 billion less than forecast over the next two years, as he compared the company to a “badly damaged plane” as a result of U.S. government actions against it. “We never thought that the U.S.’s determination to attack Huawei would be so […]

The Central government on Saturday announced a slew of relief measures, including three-month moratorium for distribution companies (discoms) to pay to power generation companies (gencos), to ensure 24X7 electricity supply during the COVID-19 lockdown period. From last August, the goverment had made it mandatory for discoms to issue a Letter of Credit to get power […]