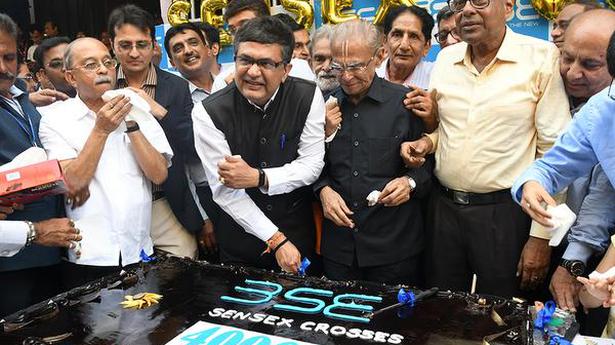 Buy the rumour, sell the news, goes the old adage in stock markets.

On Thursday, the stock market moved in line with the adage with the Sensex surging over 1,000 points in the morning session to breach the 40,000-mark for the first time ever as initial trends showed the BJP getting a strong majority.

However, as the day progressed, traders squared off their positions with the benchmarks erasing all the gains and ending the day in the red. With the uncertainty over election results over, markets would now focus on economic concerns related to growth slowdown, negative foreign flows, liquidity issues faced by non-banking finance companies (NBFCs) and global headwinds, say market participants.

The India VIX index, which is looked upon as a measure of near-term volatility, lost nearly 30% on Thursday. “The classic ‘buy on expectation and sell on news’ seems to have played out in today’s session,” said Rusmik Oza, head-fundamental, Kotak Securities.

“Some of the passive money that had come in the last three months at lower levels could be going out due to global worries. The strong election verdict is beyond expectation and long only money, both from FIIs and local investors, will surely resume in the next few trading sessions,” he added.

Incidentally, the reversal of gains was primarily led by profit booking in most of the index heavyweights as the broader market breadth was almost balanced with 1,167 stocks gaining ground as against 1,347 declines.

The Sensex pack saw an equal mix of gainers and losers with 15 apiece.

“Now with that uncertainty behind, market will focus on steps taken by the government to encourage investment and give push to consumption, which is hitting a soft patch,” said Nilesh Shah, managing director and chief executive officer, Kotak Mutual Fund.

The direction of the market would depend on the steps that the government takes to accelerate growth, he added.

Global financial major Morgan Stanley, which has a Sensex target of 45,000 by June 2020, believes that the focus of the market will now shift to the growth cycle and it expects the Reserve Bank of India (RBI) to be more accommodative and the economy to come out of the soft patch of the past few months.

“Earnings could be heading into a new cycle and domestic flows should return with strength… Investor concerns include a fresh wave of NPLs (non-performing loans), further slowdown in consumption hurting earnings growth prospects, fiscal slippage, tepid or even negative domestic flows and global headwinds,” it said in a note released on Thursday.

The Reserve Bank of India (RBI) has introduced a separate channel, namely ‘Fully Accessible Route’ (FAR), to enable non-residents to invest in specified government bonds with effect from April 1. The move follows the Union Budget announcement that certain specified categories of government bonds would be opened fully for non-resident investors without any restrictions. “Eligible […]

GDP growth in the current financial year could be just 5% according to a research report by State Bank of India (SBI). This is a sharp cut from the earlier projection of 6.1% for fiscal 2019-20. The second quarter GDP number, scheduled to be announced at the end of this month, could fall to 4.2%, […]