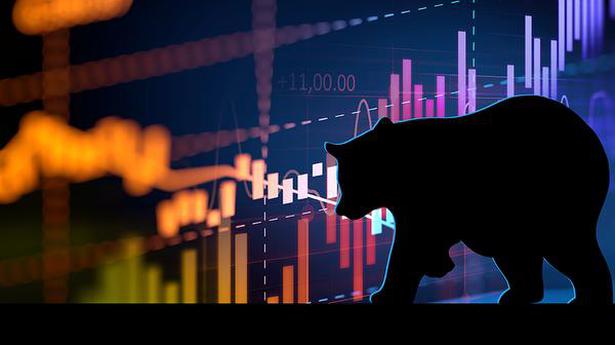 The Indian equity markets fell for the fourth consecutive session on Monday as investors remained jittery amid a mix of negative global and domestic news flow.

Among the Sensex pack, as many as 27 stocks ended in the red on Monday with Tata Steel, Vedanta, Axis Bank, Bharti Airtel, Reliance Industries, ONGC and Maruti Suzuki India, all falling more than 2% each.

Investors took a bearish stance on account of fears of a trade war after India imposed retaliatory duties on about 29 items that would impact U.S. exporters. It was in response to the U.S. government’s decision to remove certain trade privileges for Indian exporters.

To add to it, concerns of a delayed monsoon, weak trend in the global markets, slowdown in inflows from foreign investors and geopolitical tensions in West Asia also weighed on investor sentiment.

Umesh Mehta, head of research, Samco Securities, said that the Indian markets were being weighed down by a combination of factors including liquidity crunch, escalating trade war concerns and high valuations.

“Indian markets have shown a divergent behaviour over the past couple of months with large caps on the uphill and small and midcaps on a downhill. Today, however, most of the large caps faced the heat and stocks from a wide gamut of sectors and not only the financial space were down,” said Mr. Mehta.

On the BSE, more than 1,900 stocks lost ground on Monday, as against only 653 gainers with all sectoral indices ending in the red. Further, more than 200 stocks touched their respective lower circuits during the trading session.

Meanwhile, data showed that foreign portfolio investors (FPIs) have been net buyers at only ₹1,333 crore in the current month, as against ₹7,920 crore worth of net purchases in the previous month.

Moreover, international sales fell across the entire survey panel in April, as signalled by the respective index falling to 0.0. Source: thehindu.com Related

The amendment, besides deregulating production and sale of food products, will provide for no stock limit to be imposed on any produce. Source: thehindu.com Related

Prime Minister Narendra Modi on Thursday said Indian economy had the capacity to bounce back due to strong fundamentals and called upon everyone to work together and ‘start to think like a nation’. Mr. Modi was speaking at a meeting with various senior economists, venture capitalists and business leaders, ahead of the Union Budget 2020-21. […]