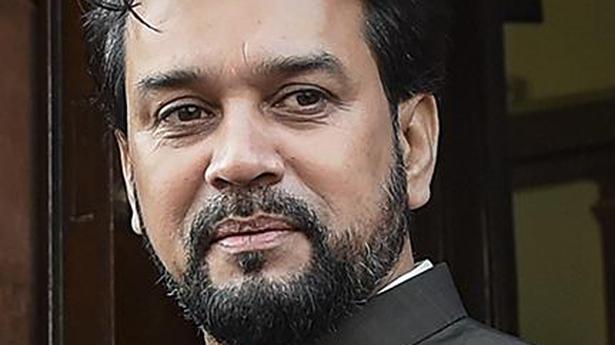 The Centre has released ₹81,043 crore as GST compensation to States for April-September 2019, Minister of State for Finance Anurag Singh Thakur said on Tuesday.

In a written reply to a question in the Rajya Sabha, he said GST compensation cess collection had shown an upward trend since October 2019.

For 2018-19 fiscal, the net collection of GST compensation cess stood at ₹95,081 crore as against the target of ₹90,000 crore. For full fiscal, the government had released ₹81,141 crore to states as compensation.

Under GST law, States were guaranteed to be paid for any loss of revenue in the first five years of GST implementation, which came into force on July 1, 2017.

The shortfall is calculated assuming a 14% annual growth in GST collections by States over the base year of 2015-16.

As many as 634 cases of fraudulent GST refund claim by exporters amounting ₹1,912 crore had been detected by the central tax authorities between July 2017 and January 2020, Parliament was informed on Tuesday.

In a written reply to a question in the Rajya Sabha, Mr. Thakur said of this, ₹238.97 crore had been recovered by the Central GST authorities from the entities which claimed the fraudulent refunds.

A total of 35 persons had been arrested by the CGST authorities, he added.

“The government has taken measures to use data analytics to identify risky taxpayers and verify them before sanction of refunds,” Mr. Thakur added.

The government is working on a scheme to push work-from-home jobs in the IT sector by offering financial incentives to both employees and employers. “Incentivising work-from-home jobs through policy-level initiatives can help in creating jobs in the ITES domain while increasing the available talent pool for the sector. This will create employment opportunities in the […]

To fulfil Prime Minister Narendra Modi’s promise of piped water supply to all rural households by 2024, the new Jal Jeevan Mission — which has no budget allocation of its own — will need to converge with other Central and State government schemes, Finance Minister Nirmala Sitharaman said. The budget for the National Rural Drinking […]