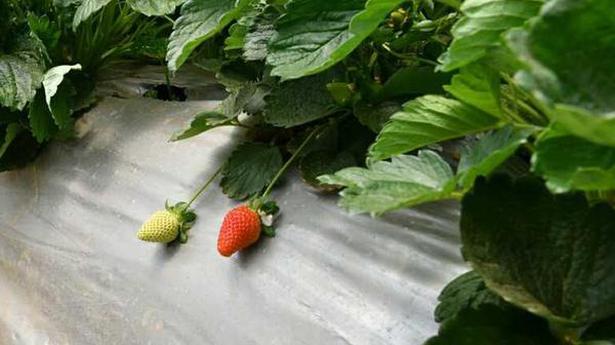 The Nilgiris, known for its teas, potatoes, carrots and a range of exotic vegetables, is witnessing farmers going in for strawberries too.

Strawberry plants were grown in the Nilgiris, especially in Thambatty area, as early as 100 years ago, says Premnath Mahalingam, director of Strawberry District.

According to Shiva Subramaniam Samraj, Joint Director of Horticulture, the Nilgiris, in the last three to four years, the area under strawberry cultivation has increased to about 25 acres in the district.

Though strawberry cultivation is risky, demanding investment and maintenance, the market is growing and farmers are slowly getting into it. Farmers get the saplings from different States and some firms import them, too.

It is a high-value, short-duration crop and the strawberries picked from the Nilgiris gardens are sold across the country, adds Premchand, director, Samberry Exotics Pvt. Ltd.. He has 7-8 acres under strawberry cultivation and plans to get into contract farming and organic strawberries this year.

Even the varieties grown in Europe and California can be raised in the Nilgiris, it is learnt. The demand for strawberries is high in the southern States and there are farmers who sell in cities such as Bengaluru, Hyderabad, and Mumbai also, says Mr. Premnath, who has two acres under strawberry.

Better awareness among consumers about the nutrient-rich fruit is driving demand, he says. After June, when production declines in the other States, strawberries from the Nilgiris are sold across the country, he adds. A majority of the strawberry produce in the country comes from Mahabaleshwar.

However, there is no harvest in that region from June to November. The fruit is harvested throughout the year only in the Nilgiris. Farmers and companies that are into strawberry cultivation in the Nilgiris prefer selling the fruit rather than going in for value addition, he says.

The fruits are of better quality if the crop is grown under controlled conditions. The initial cost of investment is high, though that varies depending on the variety. Farmers should have a polyhouse and take up mulching. They should be able to tie up directly for marketing, adds Mr. Samraj.

The Tamil Nadu government had come out with a scheme to support strawberry farmers. However, the farmers have sought higher financial support from the government, he says.

Mr. Premchand points out that the annual harvest from one acre is almost 10,000 kg. About 30,000 saplings can be planted in one acre and the investment required is ₹3 lakh.

“The Horticulture Department officials in the State visited my farm recently.

“I requested them to provide at least 50% subsidy to farmers for initial investment and financial support to go in for hydroponics and mulching. This will make the strawberry attractive to more farmers,” he says.

Australia still hopes to see India join the 15-nation ASEAN led Regional Comprehensive Economic Partnership that the government decided to quit last Monday, said former Australian secretary for foreign affairs and trade Peter Varghese, who is the author of the paper on Australia’s economic strategy for India, adding he hoped that India’s decision was not […]

Bank credit growth may have bottomed out at 6%: Crisil

Credit growth of commercial banks may have bottomed out, which is expected to be 6% this financial year and in 2020-21, the growth could improve to 8-9%, rating agency Crisil said. “The prolonged slowdown in bank lending may be bottoming out this fiscal, with gross credit offtake set to rise 8-9% on-year in fiscal 2021, […]

The Reserve Bank of India said on Thursday said it will infuse ₹12,500 crore into the financial system through bond purchases on June 20. The decision has taken based on a review of the evolving liquidity conditions and assessment of the durable liquidity needs going forward, the central bank said in a statement. The purchase […]