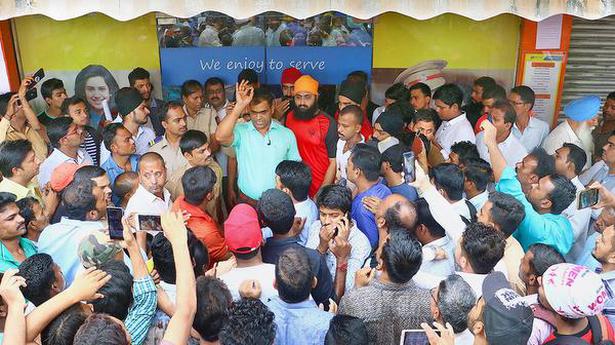 The suspended managing director of crisis-hit Punjab & Maharashtra Cooperative Bank (PMC) on Friday admitted that the past management did not keep the board in the loop about NPAs and also claimed it has an exposure of ₹2,500 crore to HDIL, which is almost a third of its loan book.

The exposure to the crippled slum redevelopment- focused HDIL had grown to ₹2,500 crore over the last six- seven years abut the now-suspended management did not report the matter to the board that its largest customer has been an NPA from the past two-three years, Joy Thomas, who was suspended by RBI as managing director, told reporters.

The urban cooperative bank’s loan book stood at around ₹8,400 crore as of FY19, while its deposits stood at ₹11,630 crore.

“The board was not aware that the NPA (of HDIL) was not disclosed. It was sanctioned at the central office level,” Mr. Thomas claimed without disclosing who took the call.

It can be noted that PMC Bank chairman Waryam Singh was on the board of HDIL for over nine years ending 2018 and owns over 1.7% equity in the bankrupt realty company.

Mr. Thomas said: “the total exposure to HDIL is about ₹2,500 crore, including the fresh two loans aggregating to ₹96.5 crore extended as late as August 30. But all the loans are fully secured to the tune of 2.5 times with land and buildings.”

“They have been repaying all these years and it was only since the past two-three years that they have not been able to service the loan,” he said.

On August 30 PMC had extended a ₹96.5-crore loan to the promoters of the HDIL Group, again without informing the board, Mr. Thomas claimed.

The new loan was been given so that HDIL could repay Bank of India, and thus avoid NCLT proceedings, as the State- run bank was about to take the company to bankruptcy courts, he explained.

“My point is that sending HDIL, which is our oldest and largest customer, to NCLT would have affected us badly as the legal proceedings would have lead to a value erosion of collaterals,” Mr. Thomas claimed.

When asked how the bank was able to hide HDIL’s NPAs for all these years, he said, “I am not going to tell you how we got it hidden. It is that the RBI has not seen it.”

It can be noted that the RBI carries out annual inspection of all urban cooperative banks balance sheet.

Mr. Thomas went to the extent of claiming that bank itself had gone to RBI on September 19, just five days before the regulator put PMC under an administrator, and apprised it of the crisis with the HDIL account and sought some time to regularise the same as the company was close to selling off some assets and repay us.

“The RBI had told us that normally a cooperative gets two months to clear the book during inspections, and we also thought we had that time. But the very next day, their inspection officers came down and collected all the information and on September 23 evening we got the order for restraining us from conducting normal banking operations,” Mr. Thomas said, adding that the RBI move was a bit too strict which caused a lot of harm to depositors.

TDS, TCS rates cut by 25% for next year; PF payments reduced from 12% to 10% for three months. Source: thehindu.com Related