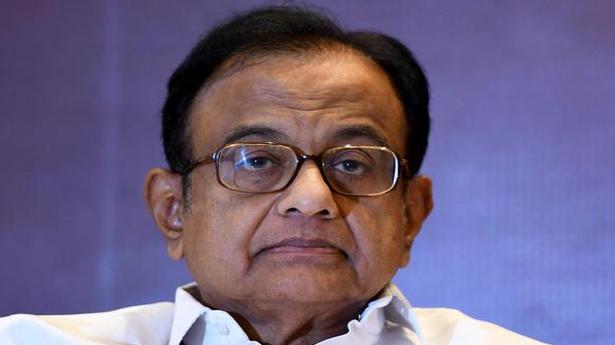 A day after India’s gross domestic product (GDP) went below the 5% mark, Congress leaders on Saturday went on the offensive and accused the Modi government of ‘ruining’ India’s economy.

Former Finance Minister P. Chidambaram, who’s in the Tihar jail on allegations of corruption, warned that the third quarter GDP could be worse and claimed that the GDP numbers for the second quarter was on predicted lines.

“As predicted widely, GDP growth in Q2 has come lower at 4.5%. Yet the government says ‘All is well’. Q3 will not be more than 4.5% and in all likelihood will be worse,” Mr. Chidambaram said in a tweet put out by his family on his behalf.

On Friday, India’s economic growth slipped to a six-year low for the July-September quarter.

“The people of Jharkhand must vote against the BJP and record their rejection of BJP’s policies and model of governance. They have the first opportunity to do so,” he said in another tweet.

Former Union Minister Manish Tewari tweeted, “Economy has collapsed not because of bad economics — but GMG-Gujarat Model of Governance that rests on three struts CBI, ED & IT. Extortion through coercion is the new economic mantra.”

“Promise after promise…2 crore jobs every year, double the price of crops, good days, Make in India, making the economy $5 trillion… Will any promise be accounted for? Today GDP growth is 4.5% which shows that all promises are false,” Ms. Vadra tweeted in Hindi.

“The BJP has ruined India, which is aspiring to grow, and its economy due to its failures,” she added and used a picture with a caption “lowest GDP in 26 quarters”.

The Congress, which started a nation-wide campaign against the Centre’s economic policies in the first week of November, is not only keen on comparing economic indicators between the NDA and the UPA but also pre-poll promises.

“I urge all of you to play your part in ensuring that our message is spread far and wide — the message of complete mismanagement in all sectors, of unfulfilled promises and deceit, and betrayal of the people,” Congress chief Sonia Gandhi told her colleagues last Thursday while addressing the Congress Parliamentary Party (CPP).

Ahead of the Congress rally in Delhi on December 14, the party has launched a campaign on skyrocketing prices of onions.

“Why is it that the onion prices are making people cry and yet farmers are not getting a remunerative price? What is the connection between the BJP and high onion prices?” asked Congress spokesperson Supriya Srinate.

Another party spokesperson Sanjay Jha took to twitter to take a dig at the government. “I am going to a wedding and I was just wondering what should I gift them. Finally, I have decided on onions,” Mr. Jha tweeted a video message.

Tamil Nadu’s fiscal deficit is estimated to be 2.84% for 2020-21, well below the 3% fiscal norms while the State’s revenue deficit is likely to double to ₹21, 617.64 crore compared to the projection of ₹10,040.31 crore, Deputy Chief Minister and State Finance Minister O. Paneerselvam said. Presenting the annual State budget for 2020-21 in […]

Adichanallur site belongs to a period between 905 and 696 BC

Carbon dating of samples excavated from the Adichanallur site in Thoothukudi district has revealed that they belonged to the period between 905 BC and 696 BC. The March 18, 2019, carbon dating report of samples that were sent to Beta Analytic Testing Laboratory, USA, was submitted to the Madurai Bench of the Madras High Court […]