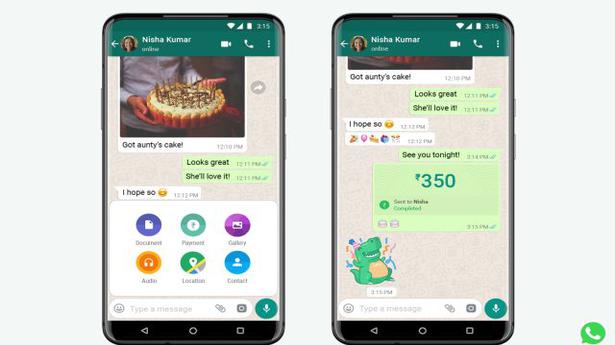 WhatsApp on Friday announced the roll out its payments services in India following approval from the National Payments Corporation of India (NPCI) after about over two years of waiting.

However, not all users in India — one of the biggest markets for the U.S.-headquartered tech giant with over 400 million users — will be able to access the feature as NPCI has mandated the expansion of WhatsApp’s UPI user base “in a graded manner starting with a maximum registered user base of twenty (20) million”. In an emailed response, the company said, “…we’ll continue to work with them [the NPCI] to make it available to everyone over time”.

The NPCI approval also follows another recent direction, imposing a cap of 30% of the total volume of transactions processed in UPI, applicable to all third party app providers, effective January 1, 2021.

WhatsApp, which is owned by Facebook, had started testing its UPI-based payments system in 2018, and will now compete with players like Paytm, Google Pay, Amazon Pay and PhonePe.

“Starting today, people across India will be able to send money through WhatsApp. This secure payments experience makes transferring money just as easy as sending a message,” WhatsApp said in a blog post.

Mark Zuckerberg, CEO of Facebook, said in a video post that India has created something “truly special” and is opening up a world of opportunities for micro and small businesses that are the backbone of the Indian economy.

“I am excited today that WhatsApp has been approved to launch payments across India. Now you can send money to your friends and family through WhatsApp as easily as sending a message. There’s no fee and it’s supported by more than 140 banks. And because it’s WhatsApp, it’s secure and private, too,” he said.

Mr. Zuckerberg said that when people can access financial tools, they are more empowered to support themselves and others, or start a business. In the long term, there is a need for more innovation that gives people control over their money, and making payments easier is a small step that can really help, he said.

In the blog post, WhatsApp explained that to send money on WhatsApp in India, it’s necessary to have a bank account and debit card in India. WhatsApp sends instructions to banks, also known as payment service providers, that initiate the transfer of money via UPI between the sender and receiver bank accounts.

“We’re delighted to be working with five leading banks in India: ICICI Bank, HDFC Bank, Axis Bank, the State Bank of India, and Jio Payments Bank. People can send money on WhatsApp to anyone using a UPI supported app,” it said, adding for additional security, a personal UPI PIN will be required for each payment.

Payment on WhatsApp was now available for people with the latest version of the iPhone and Android app, it said.

Putting an end to 11 months of consecutive decline, wholesale passenger vehicle (PV) sales in the country saw a marginal increase in October, mainly on the back of some improvement in consumer sentiment during the festive season. Sales of domestic passenger vehicles rose 0.28% to 2,85,027 units in October 2019, compared with 2,84,223 units in […]