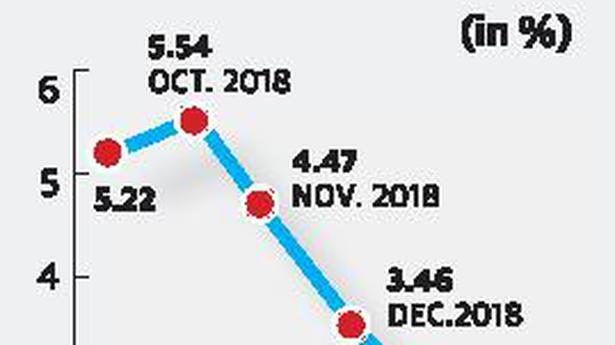 Wholesale price inflation in February snapped a three-month declining trend by rising to 2.93% on the back of firming food and fuel prices, official data released on Thursday showed.

Growth in the wholesale price index (WPI) accelerated in February from 2.76% in January, the lowest level it had touched since March 2018.

“At a more disaggregated level, inflation in some of the select cereal items such as wheat, jowar, bajra, maize, barley is now in double digits,” Sunil Kumar Sinha, principal economist, India Ratings and Research, wrote in a note. “Pulses, which as a category was witnessing deflation till November 2018, is now witnessing double digit inflation.”

“It is difficult to say whether this is a lagged impact of the government announcement of raising MSPs to 1.5 times of production costs or the lower sowing area under rabi crops,” Mr. Sinha added.

The crude petroleum and natural gas segment also saw inflation quickening in February, to 5.87% from 3.87% in January. Overall, the fuel and power segment saw inflation moving up to 2.23% from 1.85% over the same period.

The manufactured products sector was one of the few to see inflation easing in February to 2.25% from 2.61% in the previous month.

What is the Belt and Road Initiative, and why is China pushing it hard?

The story so far: Six years ago, Chinese President Xi Jinping launched a mammoth infrastructure project straddling many countries and continents. Of the projects, the most ambitious is the $60+ billion China-Pakistan Economic Corridor, aimed at linking China’s Xinjiang province with the Arabian Sea. What is it? The Belt and Road Initiative (BRI), also known […]