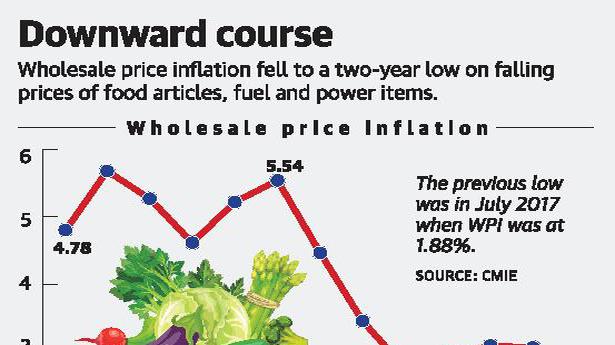 Wholesale price-based inflation hit a 22-month low of 2.45% in May on falling prices of food articles, fuel and power items.

However, onion prices spiked during the month with inflation at 15.89%, as against (-) 3.43% in April. Inflation in pulses continued in double digit for the fourth consecutive month at 18.36% in May, up from 14.32% in the previous month.

“This is clearly an indication of weakening of demand impulse in the economy. Dwindling auto and FMCG sales growth has been pointing towards this for past several months.”

The delayed and less than normal monsoon could aggravate the food inflation further in the coming months lest the government monitors the situation proactively, checks speculative activities, and intervenes in the market to stabilise prices, he added.

Inflation in ‘fuel and power’ category cooled to 0.98% from 3.84% last month on account of softening global crude oil prices.

Manufactured items too saw decline in prices with inflation at 1.28% in May, against 1.72% in April.

On the third anniversary of demonetisation, former economic affairs secretary S.C. Garg said the ₹2,000 note, which the Modi government brought replacing older 500 and 1,000 notes, were being hoarded and should be demonetised. Three years ago, on this day, Prime Minister Narendra Modi made the stock announcement of banning the use of old 500 […]

In a move to infuse sufficient liquidity into the banking system, the Reserve Bank of India has reduced the cash reserve ratio (CRR) requirement by 100 bps, increased the cap for liquidity available under the marginal standing facility, and will auction long-term repo of ₹1 lakh crore. These three measures will infuse ₹3.74 lakh crore […]

India’s fuel consumption slumped by over 66% in April as a nationwide lockdown halted economic activity and travel, which eviscerated demand. Petrol and diesel demand is down 66% in April, while aviation turbine fuel (ATF) consumption has collapsed by 90% as most airlines have stopped flying, industry officials said. India had consumed 2.4 million tonnes […]