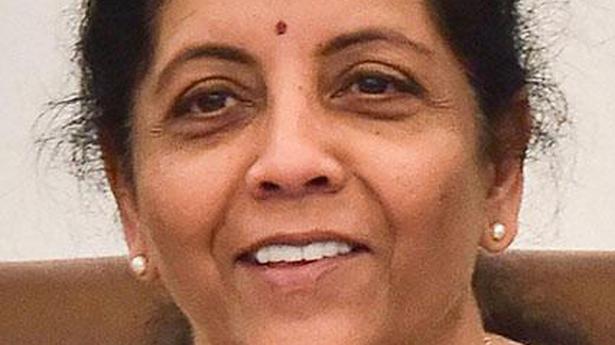 Government bonds yields dropped sharply on Monday after Finance Minister Nirmala Sitharaman clarified that there was no rethinking on issuing sovereign bonds to raise funds from abroad.

The yield on the 10-year benchmark government bond fell 11 basis points (bps) over the previous close, ending Monday at 6.41%.

“The main reason for bond yields to decline is the reassurance by the Finance Minister that there is no rethinking on the sovereign bond issue,” said a treasury head of a large public sector bank.

Last week, following reports that the government would review the Budget announcement of issuing sovereign bonds after economists raised concerns over such a move, bond yields headed north.

The bond market also cheered the Minister’s comment on the need for sharp interest rate cuts from the Reserve Bank of India.

RBI has reduced the repo rate by 75 bps in 2019 and will announce the review of the monetary policy on August 7.

Economists, however, do not expect more than a 25 bps cut in the August policy review, as scanty rainfall so far could lead to a drought situation, which in turn will stoke inflation.

“We continue to expect the RBI MPC to cut 25 bps on August 7, pause with inflation going up temporarily on base effects/drought and cut 25 bps in February again as inflation abates,” Bank of America Merrill Lynch said in a report to its clients.

“India is facing a severe drought, with rains 16% below normal. Thankfully, the Met sees rain revival over the next week,” the report said.

India has been ranked the 5th highest “Geopolitical Risk” in 2020, according to a list of 10 global risks in the year ahead, compiled by the Eurasia Group, a leading global political risk management consultancy. It said that in its second term, the Narendra Modi-led NDA government’s “social” policies were affecting India’s economic agenda and […]

Central to the challenge in petition is RBI notification of March 27. Source: thehindu.com Related

The government’s fiscal deficit touched ₹4.32 lakh crore for the June quarter, which is 61.4% of the Budget Estimate for 2019-20 fiscal. In absolute terms, the fiscal deficit, or the gap between expenditure and revenue, was ₹4.32 lakh crore at June-end, as per the data released by the Controller General of Accounts (CGA). The fiscal […]