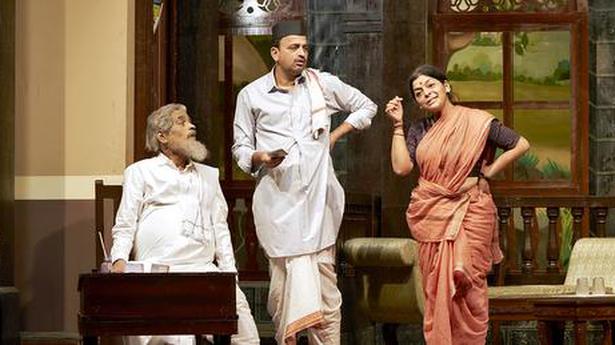 Continuing its run in Mumbai on the Marathi commercial theatre circuit is a revival of a classic production that was first staged in 1972. Himalayachi Savali (literally, The Shadow of the Himalayas) belongs to the oeuvre of one of Maharashtra’s most accomplished dramatists, Vasant Kanetkar. While the original production was top-lined by formidable talents Shreeram Lagoo and Shanta Jog, this latest version has pulled off a casting coup of its own. It marks the comeback of veteran actor Sharad Ponkshe, after an unfortunate tryst with cancer sidelined him for ten months.

Directed by Rajesh Deshpande, the play opened in Nashik on September 29, and has been drawing appreciative audiences for its beguiling mix of nostalgia and topicality. Glossy production values conspire to give it a fresh contemporary feel, even as it remains faithful to Kanetkar’s writing, described by a Sahitya Akademi publication as “[evincing] complete mastery of dramatic technique.”

Although its protagonist is Nanasaheb Bhanu (Ponkshe), Himalayachi Savali is largely based on the life and times of Dhondo Keshav Karve, the turn-of-the-century Maharashtrian social reformer whose extensive work in the field of women’s welfare led to him being awarded the Bharat Ratna in 1958, his centenary year (he died at 104). Of course, Kanetkar maintained that Nanasaheb and other characters in the play are composites of several “early 20th-century men in public life”. The achievements of these pioneers and stalwarts have cast into the shade the contributions made by those closest to them — spouses, children, siblings, cohorts.

Himalayachi Savali foregrounds the conflicts and trials undergone by Nanasaheb’s wife, Bayo (Shruja Prabhudesai), the woman who held together a precarious household even as her husband was championing the rights of women elsewhere. While the script traces the broad outline of Karve’s life, its focus is on a key dialectic – the quarrel between the so-called heroic impulse and the constraints of domestic entanglements. The shrewish Bayo is a product of her times, most certainly, but Kanetkar affords her a complex psychological portrait that makes her a three-dimensional figure capable of holding her own against her husband.

Perhaps, a stage counterpoint to this elemental clash, albeit a generation removed, might be seen in Atul Pethe’s recent play, Samajswasthya, based on episodes from the life of Karve’s eldest son, Raghunath Karve, who made great inroads in the area of family planning and birth control in the 1920s. His wife, Malati, far from being a long-suffering paragon, was an equal partner in his exploits, which brought them both crippling social censure and popular approbation, belatedly. The title of Pethe’s play refers to the sex education publication that they ran for 27 years, till 1953, when Raghunath passed away.

For Himalayachi Savali, both Prabhudesai and Ponkshe have been aged beyond their years for their respective parts. While Bayo is impetuous and expressive, Nanasaheb is much more contained in his emotions in the face of his family’s lack of comprehension for the path of social uplift he has chosen for himself. In the play, Nanasaheb also suffers from a debilitating paralytic stroke, so it’s a part that calls for an actor with considerable range, which Ponkshe undoubtedly is. One of the smaller ironies of this casting is Ponkshe stepping into the shoes of the rationalist Lagoo, who was ideologically opposed to Pradip Dalvi’s Me Nathuram Godse Boltoy, the controversial play which showcased Ponkshe’s breakout turn as Godse. Dalvi’s play opened in 1989, before it was banned, both officially and informally, for almost a decade, with Ponkshe essaying the role for 14 years. As someone with an openly close affiliation to Hindutva thinking with its ambiguous position on the rights of women, playing a character in Himalayachi Savali modelled on a proto-feminist progressive, is another departure that adds some intriguing metatext to this particular staging.

Himalayachi Savali will be staged this evening at Prabodhankar Thackeray Auditorium at 4 p.m; shows continue at various venues till November 2; see bookmyshow.com for more details

2010: “TiK ToK” – Kesha [embedded content]   “TiK ToK” by Kesha doesn’t pretend to be an anthem for a generation, but it does give a blink-and-you-miss-it peek into what makes them tick – a rare confidence, which viewed through the lens of previous generations may come across as “in-the-face self-assertiveness”. It takes some reading […]

Actors Chiranjeevi, Nagarjuna, Varun Tej and Sai Dharam Tej have featured in a Coronavirus awareness music video, recorded from their individual homes. The song composed by music director Koti has the actors urging everyone to ‘fight the virus’ by staying home, ensuring personal distancing and hygiene. Chiranjeevi shared the three-minute music video on Twitter and […]