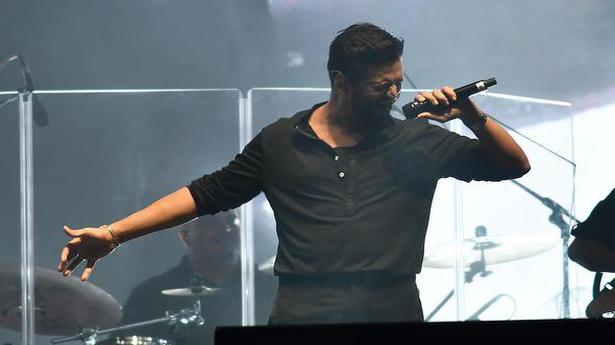 As per his own admission, Amit Trivedi does not hide emotions well. “Whatever I feel, reflects easily on my face. One look and you’ll know something is up with me,” he says.

It is this expressiveness that shines through in his songs — be it the grunge anger of Dev D that took India by surprise, the stirrings of quiet hope in Queen, or the excitement of new-found love in Andhadhun.

And it is this same expressiveness that has led to Indradhanush, the three-hour concert he brought to YMCA Grounds, Chennai, over the weekend. “Indradhanush is based on seven different emotions that we all experience, which we can equate to the seven colours of the rainbow.” The concert raised funds for RYA Cosmo Elite Foundation’s project, E-bank, which provides free medical equipment for people in need.

In for the ride

Kicking the concert off with Love, what Amit calls ‘the most powerful emotion’, the performers belt out ‘Naina Da Kya Kasoor’, ‘Pashmina’ and ‘Kaafirana’. For ‘Iktara’, he invites the hundreds gathered under the open sky to sing together, karaoke style.

For all the vagaries of modern love, its story is predictable. You meet someone, feel butterflies in your stomach, fall in love and they eventually leave you, pushing you in a pit of sadness (the depth of which can be compared only to the last time you were, and the next time you will be dumped). But from all the resulting anger, followed by fear, hope rises like a phoenix, and you are grateful that your friends still have your back.

It is almost as if the first half of Indradhanush is taking you through these stages of grief.

After Love comes Sadness, and Devender sets the mood with a soulful rendition of ‘Ikk Kudi’. It’s not all about love though. Amit sings ‘Zinda’, as he imagines the Earth, burdened by climate change, would.

But it is the next segment, Anger, that we have all been waiting for. A grunge version of ‘Emotional Atyachar’, stripped of its comic shehnai, and drilled in by the heartbeats of drums. “I think it’s one of my most overrated songs,” shrugs Amit. The screams in response would say otherwise. In 2009, the song not only gave the world a glimpse of Nawazuddin Siddiqui in an Elvis Presley costume, well before he gained the accolades he has today, it also became India’s breakup anthem for years to come.

And then follows Hope. “Do you have the freedom to say no?” These words flash on the screen, as visuals of secularism and protests play on stage to the tune of ‘Aazaadiyaan’ and ‘Maanjha’. It’s a subtle attempt at addressing the anti-CAA/NRC protests, admits Amit.

The second half of Indradhanush seems less about emotions, and more of an excuse for Amit to show off his well-deserved reputation of versatility.

In the Friendship segment, he sits down on stage with his singers to jam acoustic versions of ‘Shaam’ and ‘Gubbare’. The next segment explored cultural roots, and in doing so, had Amit perform the folk fusion numbers he is famous for. Hopping from Maharashtra (‘Navrai majhi’) to Gujarat (‘Shubharambh’), the ensemble proves that nothing gets the audience going like the Indian dhol. Behind us, the audience breaks into an impromptu garba.

“If there is an instrument that is generally used to elicit a particular emotion — for instance, a solo violin for sadness — I will make sure I don’t use it for that purpose,” says Amit, explaining why he loves to experiment with sounds. The same shehnai that he used to introduce comedy in the bitterness of ‘Emotional Atyachar’, was used to turn garba strains into a hip dance number for ‘Shubharambh’.

But the experimenting so far, has always been limited to what the script demands. As a music producer, Amit is very conscious of the director’s vision, preferring to leave him/her in charge. “That’s how it should be, cinema is the biggest medium. You are just one of the technicians helping that cause.”

However, he admits that sometimes, it can get restrictive. And then there are movies like Bombay Velvet which tanked massively. “You put all your energy into making music that is interwoven with the film. So for anybody to enjoy the music, they have to like the films. When they don’t, it is a waste of years of hard work. Most of my pieces then don’t get a chance to come out of the film and stand alone as radio-friendly hits,” says Amit.

But things are changing: his next project is going to be a “full-fledged, deep dive” into indie music, one that he will start soon after his birthday in April.

Although he hasn’t dabbled in Kollywood yet (Queen’s official Tamil remake, for which he composed the music, still has not seen the light of day), he looks forward to working with his contemporaries Anirudh, Santhosh Narayanan, Ghibran, Justin Prabhakaran and Harris Jayaraj. “According to me, there are basically two schools of music, that we follow even in Mumbai — Illaiyaraaja and AR Rahman.”

Meanwhile, Chennai is more than ready to accept his non-Tamil music. As he ends the evening with the chaotic Dance emotion, hundreds of people throw their hands up in the air, doing bhangra to ‘London Thumakda’.

A small-time filmmaker named Daniel Shravan’s warped advice to rape victims has shocked social media. In the wake of the brutal rape and murder of a veterinary doctor that has shaken the nation, Shravan has posted a series of comments that can be described as nothing but crude and insensitive. According to the filmmaker, “women […]

The M.S. film that didn’t get made

This week was M.S. Subbulakshmi’s 104th birth anniversary. Remembering her career in films and the role that she refused Source Related

‘Biggini shoot’ and the structural violence of language

English is a funny language, but the real objects of our mockery are those who speak it funnily Remember Yashraj Mukhate? He first arrived on the scene with ‘Rasode Mein Kaun Tha,’ a musical meme that spliced catchy music with a dialogue from Hindi soap opera Saath Nibhana Saathiya and became viral in hours with […]