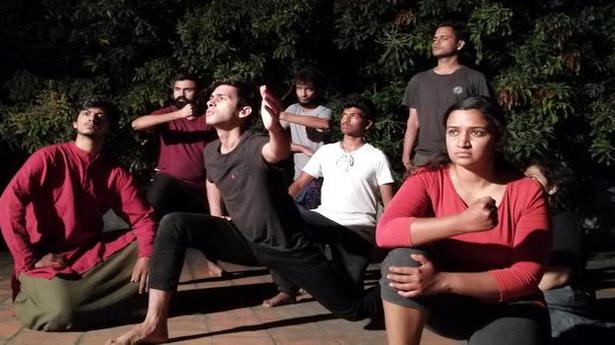 It might seem like tokenism to première a production on World Theatre Day, but Krishna Kumar S (KK) has been doing this for the past 21 years. As March 27 rolls around, the artistic director of city-based Masquerade is busy with rehearsals for Antigone, derived from Sophocles’ play written around 441 BC.

“It is one of only three women-centric Greek tragedies. It has been adapted by several playwrights — German writer Friedrich Hölderlin in the 19th century, French playwright Jean Anouilh in 1944 and German theatre practitioner Bertolt Brecht around World War II. We took largely from the original and Brecht’s version, as the prologue he gave covers a lot of universal themes,” explains KK.

The play takes off from a conversation between sisters Antigone and Ismene. Their brothers, Eteocles and Polyneices, have died fighting each other in Thebes’ civil war. The new ruler, Creon, has announced that the former will be honoured and the latter’s body will lie unburied on the battlefield. However, Antigone wants to bury her brother — the rest of the play follows her determined quest to make it happen, and what ensues when she succeeds.

KK says that the implicit themes of “individual liberty against nationalism” is what makes the story relevant in our contemporary world, adding that he has been working on this script since 2004. “I tend to do that: Midsummer’s Night Dream, which we staged in 2005, was about five years in the making,” he laughs, adding, “We had a lot of readings for Antigone, but kept waiting for the right time. We felt World Theatre Day was apt. It’s a day where we use our art to create awareness about our sociopolitical situation. It’s a good way for artists to take stock of what we are doing, and the relevance of the art we do to the society.”

For KK, who also plays a role, this production is a tribute to his mentor, the late city-based theatre veteran, Mithran Devanesen. “His wife, Nanda Devanesan, has put together the costumes, while his grandson Suhaan is also part of the cast. And Victor Paulraj, who worked with him on set design, is the consultant for the stage,” he concludes.

Sumukhi Suresh grew up in Nagpur, studied in Chennai, worked in Bengaluru as a food inspector, and eventually moved to Mumbai after she decided to pursue comedy as a full-time career in 2015. “I’m a South Indian raised in the North, so I have the best of both worlds. Chennai is one of my favourite […]

When illusionist David Copperfield sat down with 15 Indian magicians

“Why do people like magic? Because lives can be full of problems, but with magic they can escape them for a while,” says David Copperfield. This, he believes, is the responsibility of magicians: to occupy people’s minds in such a way that they forget about their worries for even a little while. For the first […]