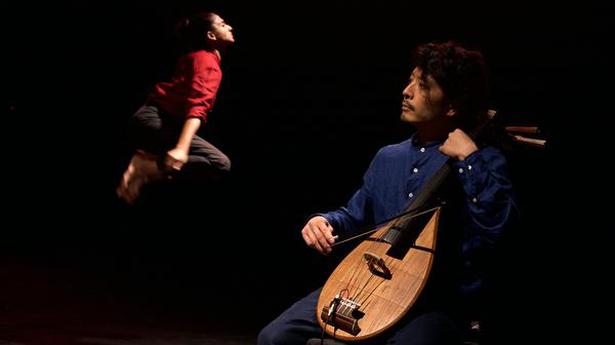 A concert with a difference opened quietly at the G5A Foundation for Contemporary Culture over the past weekend, and will continue its run this week over four days of shows. Part of the venue’s freshly minted sidelight, ‘Performance Long Runs At The Blackbox’, the piece, from the Mumbai-based Shapeshift Collective, is a collaboration between theatremaker Sujay Saple and sound artist Mitsuaki Matsumoto.

Supported by The Japan Foundation, the international co-production is tantalisingly titled Do You Want Me to Stay For Anything in Particular, and features movement artist Mallika Singh complementing Matsumoto’s live musical turn on a stringed instrument that he has fashioned combining elements of the biwa — a Japanese short-necked lute used in storytelling — and the cello. As is characteristic of Saple’s work, the concert’s light design will provide a palette of subtly shifting moods on which sonic and corporeal elements are expected to merge seamlessly.

Saple’s recent works can be called ‘limited editions’ that descend upon the city’s cultural scene in sporadic bursts. His Lullaby Stranger (2018) was also an exercise in creating aural ambiences — with audiences sprawled out on cushiony mattresses with a live singing choir softly moving in their midst like ethereal creatures. It was a collaboration with conductor Salome Rebello that made for compelling watching, or rather, a kind of immersive ‘listening’ that is also a feature of the new work. “I feel music is the most abstract form of art — it’s just vibrations — and that marries into my shift into ventures that are more formally artistic,” says Saple.

Matsumoto and Saple had earlier collaborated on two other multi-disciplinary works, in 2017. The blurb describes their current venture as “designed to enable a strong, visceral exploration of absence and loss, residues and recollections” but Saple stresses that the spark for the project wasn’t necessarily a thematic concern, but the need to simply begin an exploration with their respective ‘forms’. Matsumoto has distorted hearing in his right ear, and this provided another impetus for the liminality the work embraces. In his right ear, an ‘idiosyncratic’ version of real sounds allows him a sensory experience quite unique to himself, and in the concert, his live improvisation to Singh’s movements will likely add a dimension of crafted incongruity to the evening.

The dramaturg on the project is choreographer Poorna Swami, who had earlier collaborated with Saple on last year’s The Long and Short of It, a durational sound and performance installation that Swami co-created with sound artist Marcel Zaes, and Saple designed lights for. Singh was part of a 25-strong ensemble of performers who participated in another, now characteristically long-titled work, This is All There is When There is All This, which Saple co-directed with Rachel D’ Souza. In that piece, Singh pitched in an other-worldly performance drenched in blue paint, “her piteous eyes signalling a creature who has been irrevocably blighted even if her spirit remains unquelled,” as this writer had written then. Singh contributed substantially to that piece’s concluding anthem, and was also part of Lullaby Stranger’s unconventional choir. Here, apart from dance, she performs an aria with its own distinctive tongue and cadences.

In keeping with the trend of making theatre outings ‘complete’ evenings, the price of entry includes tacos and mead. The ‘food and theatre’ brigade in recent weeks has included Ratnabali Bhattacharjee’s Not Just ‘Akhuni’, in which Merenla Imsong chronicles the North-Eastern experience, even as the audience is served Naga delicacies from Josie’s Kitchen. ArtNowThus’ My Fair Ladle: A Disobedient Love Story created an immersive evening of live performance accompanied by a specially curated theme meal from chef Aditi Goel. Almost as a rejoinder to its title, Do You Want Me to Stay For Anything in Particular will provide multiple reasons for audiences to stick around — a light-and-sound show, music, dance, the blurring of genres, and the flow of half tippled post-show conversations.

Do You Want Me to Stay For Anything in Particular, from October 10 to 13; more details on bookmyshow.com.

Lights, camera…drama: Why some Tamil films get a delayed release

Every other week, a Tamil film fails to make it to screens on time. The most recent being Kalavani 2, which ran into a financial dispute. Before it, Vijay Sethupathi’s latest, Sindhubaadh, was mired in a similar financial quagmire, delaying the film’s release. A ₹1,000-crore industry facing such a crisis does not augur well for […]

“In our State, Sakthi or Amman is the dominating Goddess of the masses. Amman is known by many names — Angalamman, Nagathamman, Mundakanniamman, Maariamman and so on. At Utsavam 2019, we make an attempt to understand the reasons for her mass appeal and explore the concept of woman and Goddess, through performance and conversations,” says […]

Sachi Ediriweera had an eye for illustrations since he was a child. While watching cartoon films on television, he used to draw the characters on paper simultaneously. But Lionborn, which claims to be the first English graphic novel in Sri Lanka, was never a part of the writer’s long-term plans. A reimagination of Sri Lankan […]