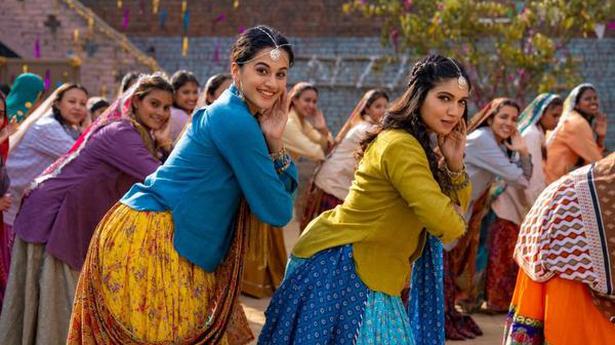 For the past few years, Bollywood has been quite interested in songs that are inspired by middle India thanks to Vishal Bhardwaj. Saand Ki Aankh is another addition to that list. But this time it’s composer Vishal Mishra taking the reins with his oft-collaborator, lyricist Raj Shekhar. Mishra’s first song for the album though, feels familiar to something a third Vishal was involved with a decade ago: Vishal-Shekhar’s Tashan. The folk rock fusion arrangement of ‘Udta Teetar’ is heady and very well done, leaning heavily towards a Western elements with a guitar-drum combination dominating the soundscape (Kalyan Baruah, Shubham Srivastava, Rushad Mistry, Darshan Doshi all in fine form – there is even a horns section that makes an appearance). The use of a harmonium is pretty much the only element from the other end. However, Shekhar’s lines and the vocalists performances – the powerhouses Sunidhi Chauhan and Jyoti Nooran lend balance to the fusion.

Vishal Dadlani of Vishal-Shekhar duo incidentally features as a vocalist for the album’s next song, ‘Womaniya’, a word that you might remember from another film in a similar rural setting, Gangs of Wasseypur (GOW). While GOW’s song (written by Varun Grover) was in Bhojpuri, the rebellious lines here are mostly in Hindi barring the title phrase and the Sanskrit couplet from Hanuman Chalisa that the song borrows. The orchestration here is more aligned towards Tamil kuthu music (something Pritam has adapted multiple times in the past) and therefore is heavy on percussion (Pratap Rath and Satyajeet Jamsandekar), and is entertaining despite the familiarity. An alternative raw version sees Mishra behind the mic, performing quite well.

Veteran singer Asha Bhosle gets roped in to convey the vicariousness of ‘Aasma’ – perfectly rendering a mellow, almost lullaby-ish tone to the track. A studio version – once again no different to the original – features the composer yet again who manages to display his range. Both the songs variants feature beautiful flute solos by Rakesh Chaurasia. ‘Baby Gold’ is quite light-hearted and has some nice touches in the backdrop, but the melody isn’t particularly memorable and the song ends up being the weak link of the album. But Sona Mohapatra and Jyotica Tangri’s vocals are top notch.

The soundtrack’s most folk sounding piece, ‘Jhunna Jhunna’ — incidentally the dominant dholak rhythm here is pretty much same as GOW’s ‘O Womaniya’ — has a charming retro flavour to it. Zoheb Khan’s harmonium and Tapas Roy’s plucked strings are of course the sonic highlights with a wonderful vocal performance by Pratibha Singh Baghel and Krutika Borkar.

Mishra’s first full soundtrack is delivered in musical style along with a steady lyrical partner in the form of Shekhar.

Raja Varu Rani Garu is a title that’s pleasing to the ears, the film is releasing in August and what makes this film interesting is more than 15 newcomers will be testing their luck, which includes lead pair Kiran Abbavaram, Rahasya Gorak and director Ravi Kiran. A B.Tech graduate, Kiran hails from Rayachoti in Kadapa […]

If you have watched the trailer for Defending Jacob, the despondent colour palette teamed with the thrumming score make for a suspenseful watch. Jacob Barber (Jaeden Martell) is accused of murdering his classmate and his father Andy (Chris Evans), a prominent lawyer, grapples with the courtroom case and with parenting. While it sounds utterly terrifying, […]