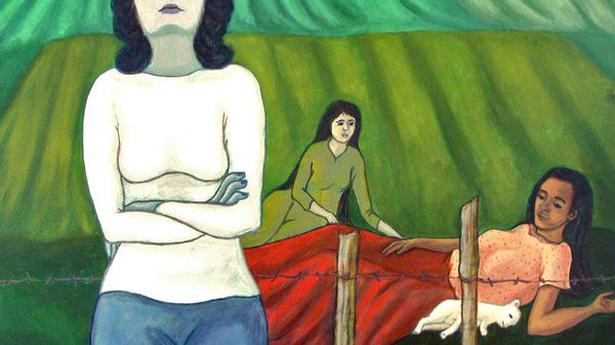 Artist Revati Gangal has lived in three cities: Mumbai, Dubai and Bengaluru, owing to our husband’s job. Through Gangal’s travels and frequent relocating, she observed how geographies and changing notions of home affects people, especially women. There was a distinctness in the way people in these three cities approached their struggles and joys, she says. Gangal’s experiences ultimately inspired her ongoing solo show, Interwoven Odyssey.

Chronicling the journey of three women, the show unfolds as each painting reveals a new facet of their lives, their personalities and pursuits. The first protagonist in Gangal’s series is a young, independent and ambitious girl. “She is confident about herself and [about] pursuing her dreams,” shares Gangal. The second is a middle-aged loner, looking for companionship as her husband is away. There’s a melancholic tone to her depiction, aided by a deep sense of longing. Lastly, there’s the dreamer who is self-contained and living a balanced life in her early 40s. “These are three different personalities in three different phases of life,” explains the 37-year-old artist.

Now based in Pune, Gangal uses these women to metaphorically tell the tale of three cities. “Mumbai has a very fast life where the ambitious character is inspired from,” she says. “People here reach out [for] their dreams and work hard.” Gangal contrasts this with Bengaluru, where she believes people, “Are not very active. They have their dreams but the pace is slow,” she adds. Dubai, on the other hand, she points out can be quite alienating and Gangal uses that to bring out the loneliness one feels in this city through the middle-aged character.

The series of 20 works, which took Gangal two years to complete, are brightly coloured acrylic works. In December this year, Gangal’s next series will be on display, which takes Interwoven Odyssey further and showcases the subconscious mind of her characters.

Interwoven Odyssey will be ongoing till May 13 at Nehru Centre Art Gallery, Worli, from 11 a.m. to 7 p.m.

Scoring high: U2 in Mumbai

After U2’s stunning performance at Mumbai’s D.Y. Patil Stadium on Sunday, many social media comments talked about it being the best-ever concert in India. The reaction is understandable, as besides the very quality of the music, it surpassed all shows in terms of its sheer scale, even though many couldn’t see the musicians properly and […]

Suriya, whose last outings on the big screen was Selvaraghavan’s NGK and KV Anand’s Kaappaan, is currently busy with Soorarai Pottru, directed by Sudha Kongara. The latest is that the actor has rapped the ‘Maara Theme’ in the film, composed by music director GV Prakash. The composer tweeted, “Mr.Maara raps … #maaratheme will be rapped […]

The infectious dance number Rowdy Baby, featuring actors Dhanush and Sai Pallavi, is YouTube’s top trending music video in India for 2019. The song is a part of the soundtrack of the Tamil film Maari 2. The song was composed by Yuvan Shankar Raja, choreographed by Prabhudeva and the film was directed by Balaji Mohan. […]