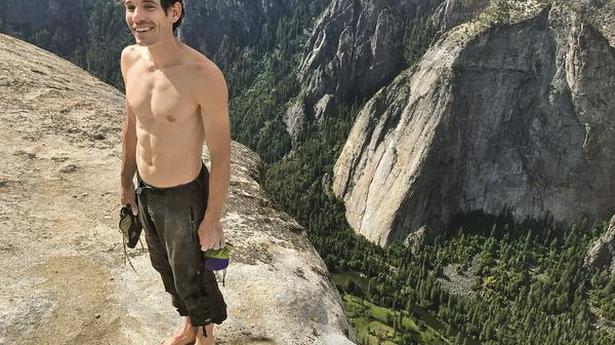 Climbing the 3,000-foot sheer granite El Capitan rock formation in the Yosemite National Park, California has been a dream for many climbers. In June 2017 Alex Honnold achieved the mammoth task but there was a catch. He is the first and only person so far to free solo the climb, that is without any harness or protective gear, depending entirely upon his hands and legs.

Documenting Honnold’s historic climb was a team led by directors Elizabeth Chai Vasarhelyi and Jimmy Chin along with friends of the climber. The team shot with Honnold for two years, recording numerous practice runs with ropes as the 33-year-old mapped his route to the top of El Capitan.

The resultant feature-length documentary, titled Free Solo won the Best Documentary Feature at the 91st Academy Awards and the 72nd BAFTAs. The shoot, Honnold admits was really intense, considering having to film when he was so high up the rock formation, especially with equipment involved. “The whole crew are very good friends of mine, [they’re] people I’ve lived with in the past and worked with them as well. That said, it’s just such a challenging situation that it is very hard,” says Honnold who reveals he never saw any of the film’s edits. The only real concern, he says, was the possibility of the crew missing the essence of the climb. “That was also the thing that I was most happy with when I saw the film,” he states. “The documentary reflected accurately on my experience.” The achievement of free soloing such an arduous climb, brings to question the fear Honnold felt, which has been discussed in the documentary. Some have even called him “superhuman”. Honnold admits it’s the immense practice that helped him get over his fear. “What the film doesn’t show is the 17 years that came before it, where I got to the point where I could look at that wall and think it was possible.”

Given the time and effort that went into it, the climb ended up being really satisfying. But Honnold admits there were points during his preparation when he “basically got scared and had to give up”, he says. “Experiencing fear is largely a physical response, it’s how your body reacts. I get over it [by] taking deep breaths, trying to compose myself and [managing] my emotions. The key was to make sure that I never got injured because of my emotions.” As part of his preparation, Honnold spoke with fellow professional climbers and mentors, Peter Croft and Tommy Caldwell about the risks and consequences. Their valuable advice helped him get into the right headspace to conquer the El Capitan. “Talking about the risks, the consequences, my fear and all of those things helped me deal with the emotions. The film itself was, in a lot of ways, emotional preparation,” he says.

Free Solo also pushed the climber outside of his comfort zone in a different way. Talking in front of large crowds became a part of his life as he and the team promoted the film for seven months during which Honnold had little time for his passion. “I used to be horrified; it was really scary being in front of crowds and talking to them,” he remembers. “The climb and shoot probably got me halfway there and the tour [was] the other half so now I’m pretty comfortable in front of crowds. Talking about the film so much has probably had the biggest impact on my life.”

Free Solo will soon premiere on National Geographic and Hotstar.

53-year-old has been mourning the loss of his mother, who passed away last week Source Related

Guitarists, comedians, slam poetry, storytellers, singers… Over the past decade, the city has been saturated with open mics of every kind. So why should Carnatic music be limited to sabhas? With this question in mind, Balaji Vijayaraghavan started Carnatic Network, a forum for Carnatic music enthusiasts, that will bring open mics, just for budding artistes, […]