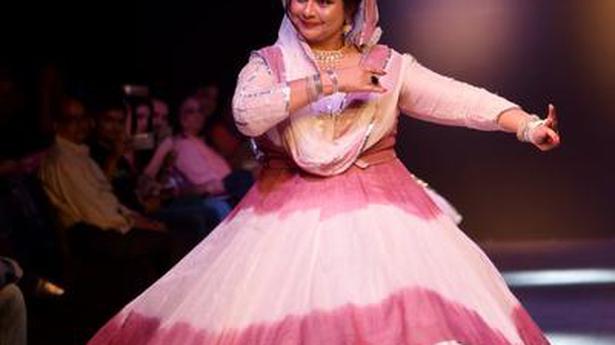 From winning the hearts of dance lovers with her rhythmic movements and expressive eyes to getting accolades for acting in Doordarshan serials, Neelima Azeem left an imprint on those who grew up in the late ‘80s and early ‘90s.

Next year, she will be completing 50 years as a dancer and Neelima would pay homage to her guru Pandit Birju Maharaj. But she desists from making an announcement as she says a lot of thought and content is needed before making a formal statement. Neelima credits dance for giving her the confidence to act. Her seriousness for dance can be seen from the fact that whenever she took a hiatus from acting, she continued her passion for Kathak. “Dance teaches you grace, posture, gait, expression, faculty and navras. A dancer would always react sharply while an actor might look awkward in certain situations.”

Excerpts from an interview:

Tell us about your tryst with Kathak?

I was a small child when I started learning this traditional dance form. I learnt dance diligently from Pandit Birju Maharaj. He has been the light and soul of my life. Everything about life, arts, aesthetics, beauty and nazakat, I learnt from him.

The high point in my career came when I represented Kathak for the release of postage stamps as part of Indian Dance series. I was 14-year-old then and didn’t know what all was happening. Maharajji had applied make up on me. As a child, I was full of unbridled energy..

At 15, I started my solos. At 17, I was crowned the ‘Princess of Kathak’ . And then I got to travel all over the world. Recognition also came in the form of the Indira Gandhi Award for dance. I received it along with Ustad Amjad Ali Khan, who received it for music.

Which serial gave you the ultimate satisfaction as a creative artiste?

“Phir Wahi Talash”, directed by the late Lekh Tandon, is my favourite. I started my television career with this serial. Shehnaz, the name of my character, became a darling of the nation. It was gratifying to see it become such a hugely popular serial.

“Talash”, made by Hrishikesh Mukheree, was also an iconic series. Moushumi Chatterjee and I played sisters. I was Hrishikesh da’s favourite actress and I learned a lot from him.

These days, you are playing motherly roles. How is the experience?

Being a mother myself, it is easy to translate a mother’s emotion on screen. My recent web serial “Mom and Go” for Zoom Studio was very popular. It won a web series award. Mothers have different stories to tell. . There can also be indifferent mothers. As theatre artists, we have been trained to highlight the emotional arc of characters. However, it is not necessary to be a mother in real life to play a mother on screen. Look at Shabana Azmi, she is able to play such roles with such conviction. Maternal instinct is palpable in many of her characters. This is the wonderful thing about acting. An actor lives many lives.

How have you been mentoring your sons?

I do not know whether I have formally mentored my children. They have grown up in an artistic ambience. Both my sons are well versed in Urdu theatre. They have grown up watching me perform. Of the two, Shahid travelled a lot with my Kathak troupe. He would often sit in the lap of Birju Maharaj. Shahid put his learning into effective use while doing songs such as “Bismil” in “Haider” or enacting “Nagara Nagara” song in “Jab We Met”. Ishaan is also a fabulous dancer because it (dance) is in his genes.

I teach acting to newcomers and Ishaan attended some of my classes. However, there has been no formal training. The both are like little fish who are swimming in this huge ocean of performing arts. When the film “Beyond the Clouds” came to Ishaan, he was confused as he also wanted to work with Karan Johar in “Dhadak”. Majid Majidi was happy to cast him. I told him that he would become a fine actor after working with Majid Sir but told him to talk to Karan too. Karan Johar said Majid was such an iconic director, so he should go ahead with his film.

While shooting his latest calendar, G Venket Ram had a peculiar problem. He had to find a dog. One that resembled the border collie in one of Raja Ravi Varma’s paintings. Titled There Comes Papa, the 1893 painting portrays a woman carrying a toddler, with a faithful dog sitting at her feet. The calendar is […]

Why the documentary ‘By Stanley For Stanley’ is a must watch

Landscapes of orange and green, an unlikely friendship between a young boy and a man, and the normalcy of using their feet to paint, drive and eat encompassed the film Dla Stasia (in English: By Stanley For Stanley), a documentary on the life of two individuals born without arms. Screened at the two-day AbilityFest 2019 […]

‘Bard of Blood’: When Mandawa turned into Afghanistan

Scores of junior artists draped in traditional Afghan robes with turbans wrapped around their heads take their positions at Chokhani Haveli, Mandawa (about 200 kilometres from Jaipur, Rajasthan). The showrunners of Netflix series Bard of Blood are filming a trivial, yet seemingly significant, scene here. The sandy expanse of the Thar desert seems to have […]